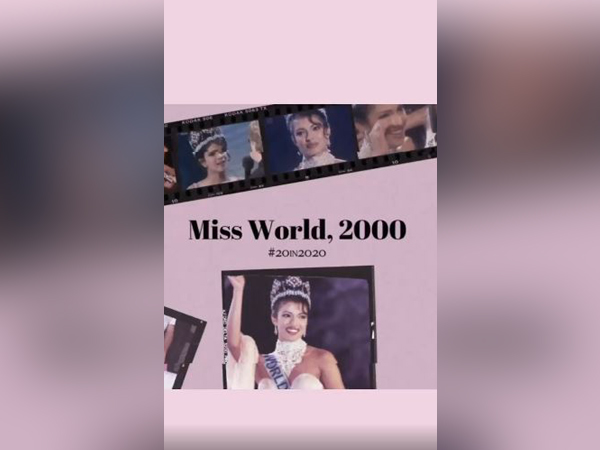 California [US], October 27 (ANI): Celebrating what can be termed one of the most cherished moments of her life, superstar Priyanka Chopra Jonas on Tuesday reminisced the moment when she was crowned as Miss Universe 2000, and the first thing her mom told the actor post the crowning ceremony.
The ‘Baywatch’ star posted a clip on Instagram on that chronicled the moment and her conversation with mother and brother post she was crowned.
As the video starts, it shows the moment when the announcement for the then Miss India – Priyanka Chopra, being chosen as the Miss World 2000 is captured. Following her being crowned the voiceover says, “This is remarkable. This is the fifth time India has won, Miss World.”
Priyanka is seen beaming with happiness as she waves off at the audience present in the hall.
Reliving the moment, the video then shows as a fast forward to the present day, a clip where the ‘Bajirao Mastaani’ star is seen seated next to her mother – Dr Madhu Chopra. In the video, Priyanka asks mom,” Do you remember the crowning moment of when I won Miss World?”
Madhu replies, “First runner up was announced, and Miss World is Miss India, Priyanka Chopra. We were both like literally under the chairs. The entire hall erupted, all the Indians just stood up erupted.”
The video then shows the ‘Dostana’ actor on a video call to brother Sidharth, who said, ” I remember at the Millenium Dome, being on the stage when I was only 11, 12 years at the time. But mixed feelings for me were I was… that she won but the very next moment I learned that I would be going to the US for further studies instead of her.”
The ‘Mujhse Shaadi Karogi’ star then said, ” Yeah, that was rough. Um, I never even thought that at that time, that you know, what my win did to my family.”
Following which, Priyanka’s mom says, ” I have tears streaming down my eyes. I didn’t know what’s gonna happen. I just needed to hug her, that’s all I knew, And when I hugged her, I spoke the stupidest thing that should have been….” As they both burst out in laughter.
Madhu then said, “Instead of telling her that I’m so glad, so happy that you’re Miss World. I said babe, now what will happen to your studies?” and they both laugh hard while they remember the moment.
Priyanka captioned the clip on the photo-sharing platform as, “Miss World, 2000… Picture this… I just turned 18 and won Miss World!! When I finally reunited with my parents among all the chaos on stage, the first thing my mom said to me was “babe, what’s going to happen with your studies?” #IndianMom #20in2020.” (ANI)

Sehwag,Irfan to be UC cricket captains during IPL