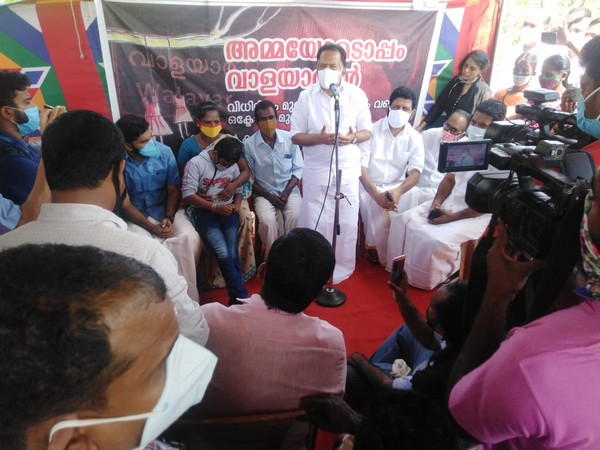 Palakkad (Kerala) [India], October 26 (ANI): Parents of the minor girls who were allegedly sexually abused and found hanging in 2017, have started a week-long sit-in protest in front of their house at Walayar here in Palakkad district.
The parents are demanding a High Court-monitored reinvestigation into the case.
The mother has demanded that the culprits be hanged and strong action be taken against the police officers who had sabotaged the case.
The protest is being organized by Justice for Walayar sisters forum.
BJP state president K Surendran visited the parents on Monday morning. He has alleged Surendran alleged that Government is trying to influence the parents.
“The victim’s parents visited the Chief Minister on my instructions and he has offered all support. Why did the Chief minister step back from his promise? The Government and police are sabotaging the case,” said Surendran.

Opposition leader Ramesh Chennithala also visited the parents. Chennithala said that it is an insult to Kerala and what is the difference between Uttar Pradesh and Kerala.
“What is the difference between Hathras and Walayar. The incident that happened in Hathras also happened in the land of Kerala where there are cultured and literate people with high sense of democratic rights. The culprits are being protected by the Government,” said Chennithala.
Two Dalit minor sisters were sexually abused and found hanging in the shed where they were lived in three months gap in 2017. Last year a POCSO court had acquitted all the accused in the case. Following that Government and parents approached High Court and now the police is reinvestigating the case as per the order of the court. (ANI)

Scoreboard of England’s innings against India