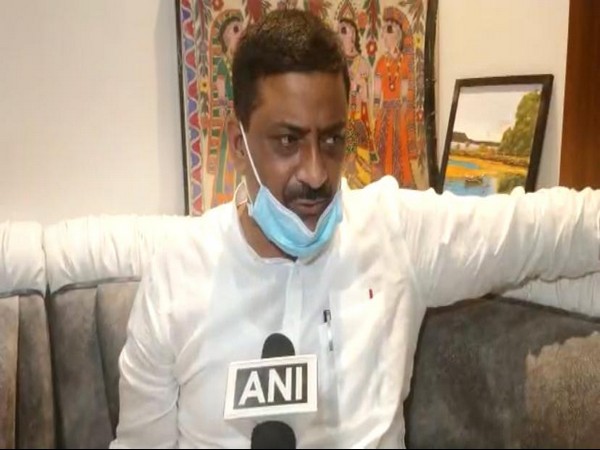 By Mukesh Singh And Sahil Pandey
Patna (Bihar) [India], October 26 (ANI): Ahead of the assembly polls in Bihar, state minister Sanjay Kumar Jha hit back at Chirag Paswan’s “will send Nitish to jail” diatribe by likening the Lok Janashakti Party (LJP) chief to “a monkey dancing to someone else’s tunes.”
“He (Chirag) starred with Kangana Ranaut, now see where Kangana has reached. Similarly, Sushant Singh Rajput without any background made his mark in Bollywood. ‘Jamura hota hai naa, usko nachata hai madari. Ye jamura bane hue hain.’ (He is the monkey who is dancing to someone else’s tunes),” Jha told ANI here.
Jha, when asked about who the behind the controller of the scene for the LJP chief said, “It is open to interpretations.”
The state minister also took a jibe at Chirag Paswan’s acting career stating that the latter will fail as a politician just like his acting career went south.
“This kind of low level of politics has not been witnessed ever in Bihar. In recent times, he worked in a movie and it was that kind of a movie where people left the theatre before the interval. After the first phase of the polls, a similar fate will meet him in politics,” he added.
Jha defended the Bihar CM by stating, “Nitish Kumar has an untainted image in Bihar. You can question his work, but the work is visible to the public and they will decide on it.”
The LJP president on Sunday had said that if his party was voted to power, all those involved in “corruption” in the Nitish Kumar government’s Saat Nischay scheme, including the Chief Minister himself, would be sent to jail.
The Bihar Assembly elections will be held in three phases on October 28, November 3 and November 7. The counting of votes will be held on November 10. (ANI)

Harsh Vardhan takes dig at Congress over farm loan waiver promise, says no one can befool people of Bihar