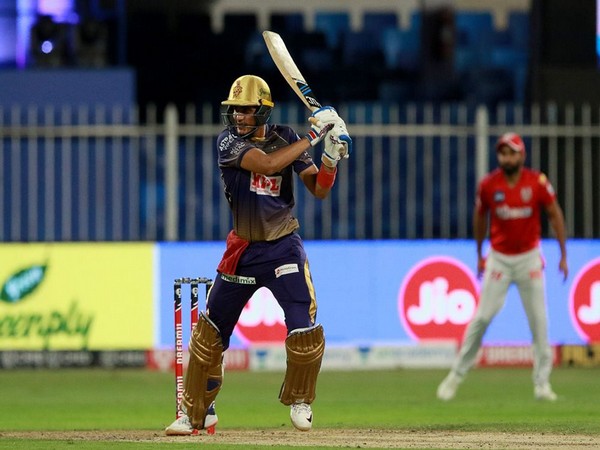 Sharjah [UAE], October 26 (ANI): Shubman Gill played a knock of 57 runs as Kolkata Knight Riders (KKR) posted a total of 149/9 in the allotted twenty overs against Kings XI Punjab (KXIP) here at the Sharjah Cricket Stadium on Monday.
Sent into bat first, KKR got off to the worst start possible as the side lost its opener Nitish Rana (0) on the second ball of the innings as he was sent back to the pavilion by Glenn Maxwell. In the very next over, Mohammad Shami provided two more breakthroughs as he dismissed Rahul Tripathi (7) and Dinesh Karthik (0), reducing KKR to 10/3.
Skipper Eoin Morgan then joined Shubman Gill in the middle and the duo stitched together a counter-attacking partnership, putting KXIP bowlers under immense pressure. The duo put on 81 runs for the fourth wicket, but KXIP came back strongly as Ravi Bishnoi dismissed Morgan (40) in the 10th over, reducing KKR to 91/4.
Sunil Narine (6) failed to repeat his heroics from the last match against Delhi Capitals and he was clean bowled by Chris Jordon in the 11th over, reducing KKR to 101/5.
Kamlesh Nagarkoti (6) and Pat Cummins (1) also failed to impress with the bat and as a result, KKR was reduced to 114/7 in the 16th over.
In the final three overs, KKR failed to hit big shots consistently and as a result, the side was restricted to under the 150-run mark. For KXIP, Mohammad Shami scalped three wickets while Ravi Bishnoi and Chris Jordon picked two wickets each. Lockie Ferguson remained unbeaten on 24 for KKR.
Brief Scores: Kolkata Knight Riders 149/9 (Shubman Gill 57, Eoin Morgan 40, Mohammad Shami 3-35) (ANI)

WHO sends expert mission to China amid coronavirus outbreak