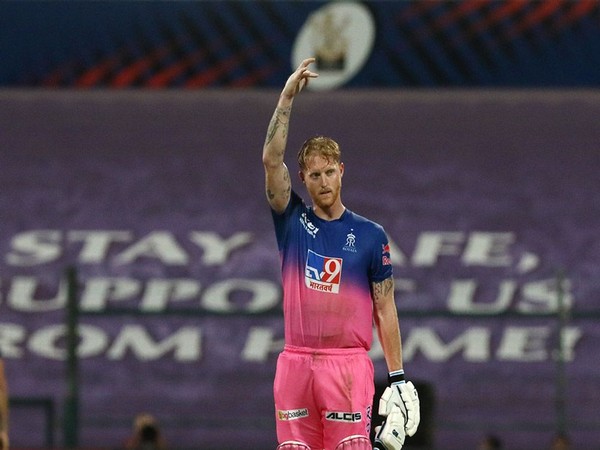 Abu Dhabi [UAE], October 25 (ANI): After registering a comprehensive eight-wicket win against Mumbai Indians, Rajasthan Royals’ all-rounder Ben Stokes dedicated his century to his father who is battling it out with cancer.
Rajasthan chased down the target of 196 with eight wickets in hand and balls to spare. Ben Stokes and Sanju Samson played knocks of 107 and 54 respectively. For Mumbai Indians, James Pattinson returned with the figures of 2-40.
Stokes and Samson put together an unbeaten partnership of 152 runs. With this win, Rajasthan Royals has now moved to sixth place in the points table with 10 points while Mumbai Indians are still in the top spot with 14 points. For the knock of 107, Ben Stokes was adjudged as ‘Man of the Match’.
“It’s sort of bittersweet, to be honest. A bit taken aback by why it’s taken me so long to get into the tournament for the team. To be honest, the training I’ve had yesterday was the best I had throughout my time here, so I came into this with a bit of confidence. It was coming on nicely,” Stokes told host broadcaster Star Sports at the post-match presentation.
“The harder shot to play was when they dug into the wicket. And we scored off Bumrah probably a lot freer than we thought we’d be able to. Things are a bit difficult right now, but hope this has given a bit of happiness back home,” he added.
Stokes’ father Ged, a former rugby league international player, was hospitalised in Johannesburg last year right ahead of Christmas. Stokes also missed the initial few matches of this year’s IPL as he was with his ailing father in Christchurch.
Earlier, Saurabh Tiwary and Hardik Pandya smashed 74 runs off the final four overs as Mumbai Indians posted a total of 195/5 in the allotted twenty overs. Hardik Pandya brought up his half-century off just 20 balls and he remained unbeaten on 60 runs off just 21 balls.
For Rajasthan Royals, Jofra Archer and Shreyas Gopal scalped two wickets.
Rajasthan Royals will next lock horns with Kings XI Punjab on Friday, October 30 at the Sheikh Zayed Stadium in Abu Dhabi. (ANI)

Working with J.P. Dutta was a big tick mark for Gurmeet…