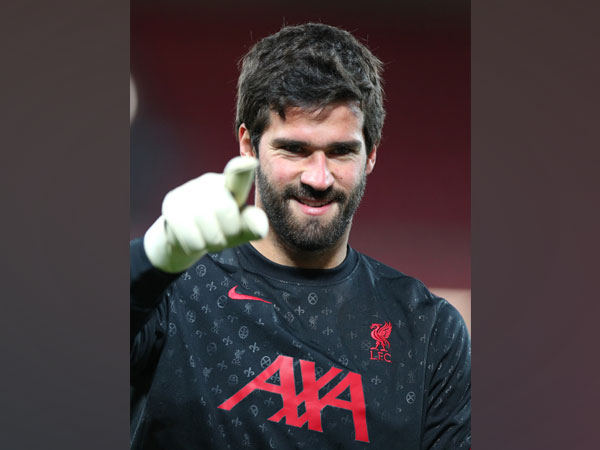 Liverpool [UK], October 25 (ANI): Liverpool manager Jurgen Klopp is pleased with the return of Alisson Becker to the team and said the goalkeeper’s return is a “pretty big boost” for them.
Becker returned to action on Sunday against Sheffield United, having missed the last three games due to a collarbone injury.
“Look, Adrian did really well again in that moment, but getting Ali back is, of course, a pretty, pretty big boost for all of us. It was nearly three weeks he was out, I think, and feels like we had 50 games between now and then! I was really happy when he gave the green light and said, ‘Yes, I am ready’ because it was his decision,” the club’s official website quoted Klopp as saying.
“I cannot make the decision for him and tell him, ‘Do you still feel pain or too much pain when you bounce on the ground or whatever?’ So it was his decision and he said thumbs-up and so we were happy,” he added.
Liverpool registered a 2-1 win in the Premier League clash against Sheffield United. Roberto Firmino and Diogo Jota scored one goal each in the match to hand Liverpool a win.
Praising Jota’s performance, Klopp said: “It is not too much about what he’s brought in the team. He is a good player, that’s why we signed him. I said it only a few minutes ago when I was speaking with my coaches that it is so easy – he is such a likeable person and so it is so easy to like him. That makes everything easier. Then the player he is: he is quick, he has the physicality, he is strong, he is good in the air, he is good on the ground… a lot of good things.” (ANI)

Hardik, Jadeja took the game away from us: Maxwell

Two adults can live together without interference from families: Allahabad HC

Agriculture Minister’s BIG remark: ‘May give in to some demands raised by farmers’

No language will be imposed on any student, says Education Minister Ramesh Pokhriyal

What? PUBG India launch could be pushed to January? Details here

Changes brought in a bit of freshness: Virat Kohli

Need to be on your toes against Australia: Hardik Pandya

The Dirty Picture: When Vidya was called mad

‘Law and order situation pathetic in UP’:…

England’s Prior to be out for 4 months after surgery