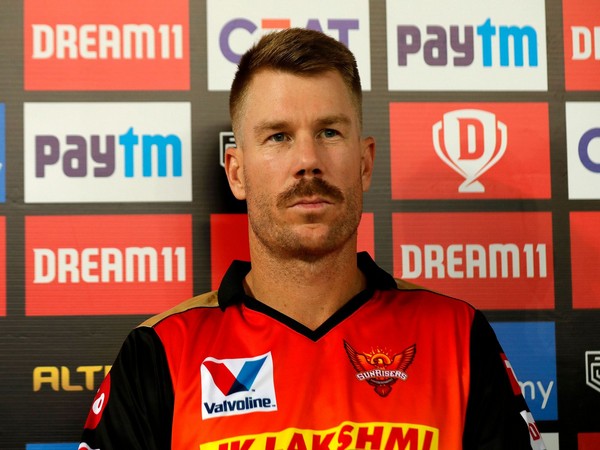 Dubai [UAE], October 25 (ANI): After failing to chase down a small target against Kings XI Punjab (KXIP), Sunrisers Hyderabad (SRH) skipper David Warner said he feels that his side got a bit complacent during the chase.
SRH suffered a 12-run defeat against KXIP after the Warner-led side failed to chase a target of 127. Chris Jordan and Arshdeep Singh took three wickets each as SRH were all out on 114 runs.
“In regards to our batting, we got off to a good start, but very disappointed. We did not get the job done. We probably got a bit complacent in the middle and we did not take the game on enough like we did in the previous game. I think we felt that we would get the runs easily but then we sort of let the balls get ahead of the runs,” Warner said in the post-match press conference.
However, Warner praised the team’s bowling performance and said it was a “special day” for them.
“Our bowlers did an incredible job. They did an exceptional job through the middle period to take wickets. Today was a special day for them,” he said.
With this win, KXIP now has 10 points and is placed at the fifth spot in the points table. On the other hand, SRH is in sixth place with 8 points. (ANI)

Teja begins hunt for actors for his next

Feel blessed to have been born as your daughter, says…