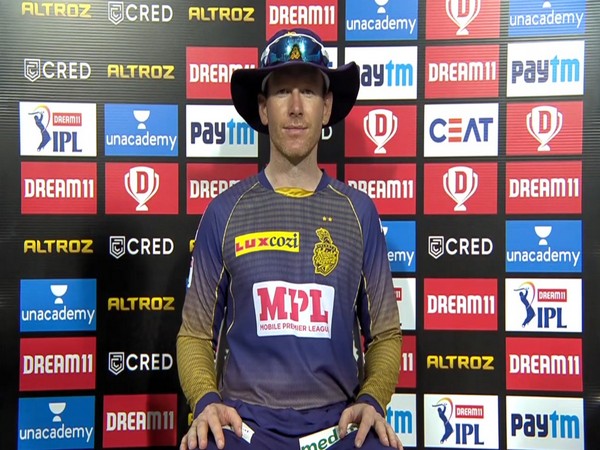 Abu Dhabi [UAE], October 24 (ANI): Kolkata Knight Riders skipper Eoin Morgan termed the 59-run emphatic win over Delhi Capitals as the “most complete performance” of the tournament so far.
Delhi Capitals failed to chase a total of 195 as the side was restricted to 135/9, handing KKR a win by 59 runs. For KKR, Varun Chakravarthy was the standout bowler as he finished with figures of 5-20.
Shreyas Iyer was the highest run-scorer for Delhi as he played a knock of 47 runs. With this win, KKR has put themselves ahead in the race for a playoff spot. The side now has 12 points from 11 matches and are placed in the fourth position.
“It is probably the most complete performance as a group in this tournament so far and I think the timing of this could not be any better. Playing against the second-placed side, obviously, tough opposition coming towards the business end of the tournament, two points are huge for us,” Morgan said in the post-match press conference.
Nitish Rana opened the innings for KKR along with Shubman Gill and went on to play a knock of 81 off 53 balls. Rana tributed his half-century to father-in-law, who passed away yesterday.
When asked the intent of sending Rana for the opening, Morgan replied, “We wanted to add some intent at the top, we feel like Nitish is in good form”.
“Today, he proved what we were thinking was along the right line. Nitish is a very talented young batsman and he showed a lot of promise in previous IPLs. This year, he is probably not on what he likes to do but this can be the start of his campaign kicking things forward. Today, against the best bowling line-ups of the tournament he played outstandingly well.”
“We all know what Nitish was going through and has continued to grieve at the moment but trying to channel exactly what he is trying to do and churning out well, so huge credit to him,” he added.
Sunil Narine scored 64 off 32 including four sixes after missing the four games for the side due to suspect bowling action. Morgan lauded the Caribbean all-rounder and said he is an integral part of the team.
“Sunil has been an integral part of this franchise for a number of years. Now, his ability as an all-rounder is key in our team. To have him back and performing not only with the ball but with the bat, I think it is just outstanding and just proves how valuable he is to the team,” he said.
KKR will next lock horns against Kings XI Punjab on Monday, October 26 at the Sharjah Cricket Stadium. (ANI)

Sasi plea being processed by brass of K’taka jail dept:

Under what power did you direct banks to freeze Amnesty a/cs, K’taka HC asks ED