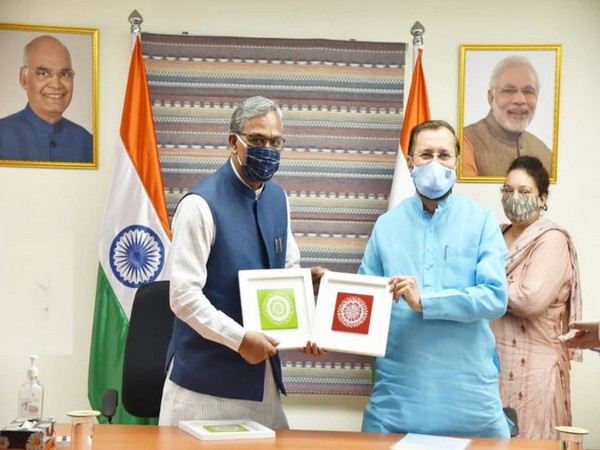 Dehradun (Uttarakhand) [India], October 23 (ANI): Uttarakhand Chief Minister Trivendra Singh Rawat on Thursday met Union Forest and Environment Minister Prakash Javadekar in New Delhi and urged the Centre to approve the Rs 262 crore Compensatory Afforestation Fund Management and Planning Authority (CAMPA) scheme
“Met Union Minister for Forests and Environment Prakash Javadekar in New Delhi today and requested for the approval of the CAMPA scheme for more than Rs 262 crore. On my request, Union Minister Javadekar has given his in-principle approval in the matter,” tweeted the Uttarakhand Chief Minister informing about the development.
As per the state government’s release, the Chief Minister during the meeting said that due to the COVID-19 pandemic 19 lakh people of Uttarakhand have come back to their state.
“The state government has taken several steps including the Mukhyamantri Swarojgar Yojana for their employment. Under CAMPA scheme, a plan has been made to employ 10,000 people. Uttarakhand has played an important role in the conservation of environment and biodiversity. In order to effectively curb human-wildlife conflict and forestry in the state, a proposal for additional funds of Rs 262.49 cr has been sent to the Ministry of Forests, Government of India, under CAMPA for 2020-21,” the release said.
It further said that Rawat told the Union Minister that in Uttarakhand, wild animals especially monkeys, pigs among other animals harm farming, and there is a need to set up wildlife rescue centres to curb incidents of leopard attacks on people in mountainous areas.
“He also requested the Union Minister to include these centres as forestry activities to which Javadekar gave his in-principle approval,” the release added. (ANI)

Anti-parasitic drug ivermectin not to be included for COVID-19 treatment protocol: Health Ministry