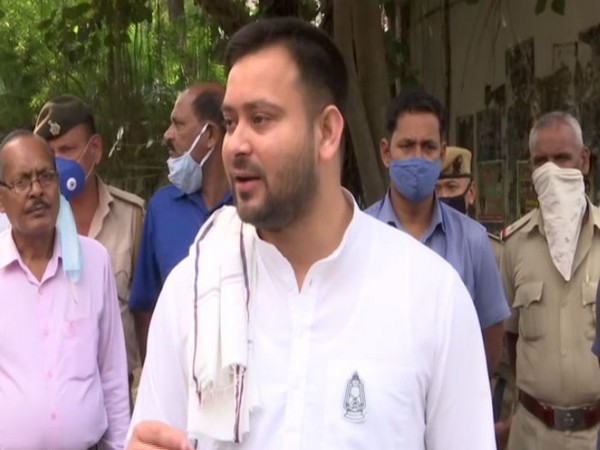 By Sahil Pandey
Patna (Bihar) [India], October 22 (ANI): Hitting out at Bihar Chief Minister Nitish Kumar, Mahagathbandhan’s chief ministerial candidate Tejashwi Yadav on Thursday said that Kumar is mentally and physically tired and he cannot handle the State anymore.
“I am again saying that Nitish Kumar is tired and cannot handle the State. Mentally and physically he is tired of handling the State,” Tejashwi said while interacting with media.
Reacting to the ‘Lalu Yadav zindabad’ slogan raised in Nitish Kumar’s rally, he further said, “Everyone is asking Nitish Kumar, where was he when calamity had hit Bihar and on what basis is he asking people to vote for him. For the last 15 years, no employment opportunities have been brought in here, no industry has been set up, migration has increased, poverty did not reduce then on what basis is he asking for the vote?”
Yadav scion also promised to scrap the notification in Bihar Chief Minister’s tenure of the retirement of government employees at the age of 50.
“Nitish Kumar put a notification that government employees will get retirement at the age of 50. This will be removed when we will come into power,” he added.
Responding to a question on large crowds at rallies, not following the COVID norms, he said, “I have appealed to Election Commission (EC), I asked for the health insurance for the voters. We asked EC earlier that if the situation (COVID-19) does not come under control then elections could be postponed, we were not in a hurry. But EC has decided to conduct elections and we will following that. We cannot stop people coming to a rally.” (ANI)

Why is Huawei still in the UK?

Hyderabad: Two held for burglaries in houses of Rajasthan natives

‘Recover as fast as you bowl’: Rajasthan Royals to Jofra Archer

I have learned almost everything from Rio Olympics: Mirabai

PM to interact with state, district officials across country on COVID-19 management tomorrow

Himani Shivpuri: No carefund for actors

Marvel-DC superwomen who got solo acts

‘Janmasthanam’ will appeal to women audiences:…

PM Narendra Modi should quit if he can’t repeal farm…