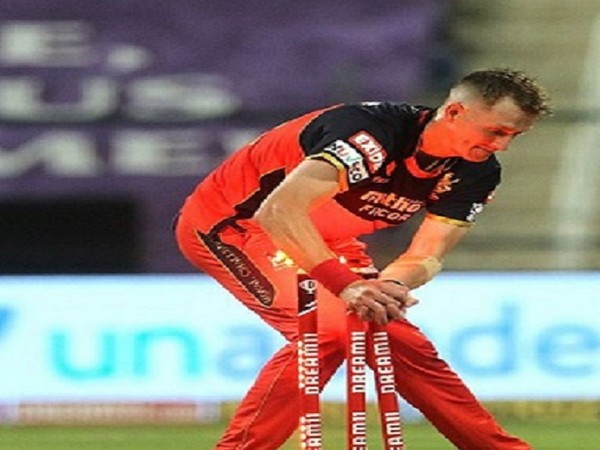 Abu Dhabi [UAE], October 22 (ANI): With star batsman AB de Villiers and Indian skipper Virat Kohli, Royal Challengers Bangalore (RCB) has a robust batting order and now with the inclusion of South African all-rounder Chris Morris, the bowling line up has been bolstered, according to pacer Mohammed Siraj.
RCB showed no mercy as they thrashed Kolkata Knight Riders by eight wickets on Wednesday.
Siraj was the star of the show as he not only became the first bowler to bowl two maiden overs on the trot but also took three wickets, giving away just eight runs.
The pacer said after the match that the RCB camp has a lot of positive energy and the bowling unit has been strengthened with Morris’ inclusion.
“RCB camp has a lot of positive energy. We talk to each other and help each other which boosts our morale. Now Morris has come in the team and he has strengthened the bowling line up. This win feels good and now we got 14 points,” Siraj told RCB pacer, Navdeep Saini, in a video posted by iplt20.com.
RCB chased down the total of 85 with eight wickets in hand and 39 balls to spare. Devdutt Padikkal and Gurkeerat Singh Mann played knocks of 25 and 21.
With this win, RCB has gone to the second position in the points table with 14 points from 10 matches while KKR is at the fourth spot with 10 points.
“The way we bowled today was really well. The win was important for the team and to carry forward the momentum,” said Siraj
RCB will next take on Chennai Super Kings on Sunday, October 25. (ANI)

Cuba announces restoration of relations with US

An uphill task for India in Davis Cup: Somdev