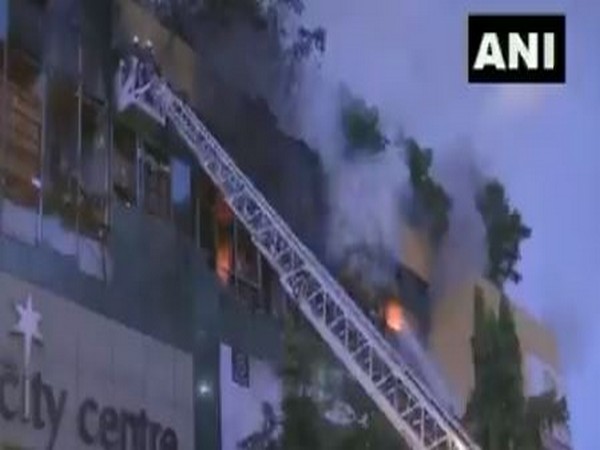 Mumbai (Maharashtra) [India], October 23 (ANI): Firefighting operations are underway at a mall in Nagpada area in Mumbai on Friday morning where a major fire broke out last night.
The fire, which has now been declared Level 5, broke out at around 9 pm on Thursday night.
24 fire engines along with 16 jumbo tanks are deployed and working to extinguish the fire. Rescue van and other vehicles are also present at the spot.
A total of about 250 officers and staff, including the Chief Fire Officer of the Mumbai fire brigade, Shashikant Kale, are making continuous efforts to extinguish the fire.
Mumbai Mayor Kishori Pednekar, MLA Amin Patel, Chairman of the Standing Committee of the Corporation Yashwant Jadhav, Additional Municipal Commissioner (West Suburbs) Suresh Kakani had visited late at night and got information about the actual situation.
A 55-storey building adjacent to the Mall was emptied and its residents have been shifted to nearby grounds for safety purposes.
No casualties have been reported so far. Further details are awaited. (ANI)

Always good to have captain on your side: Nehra