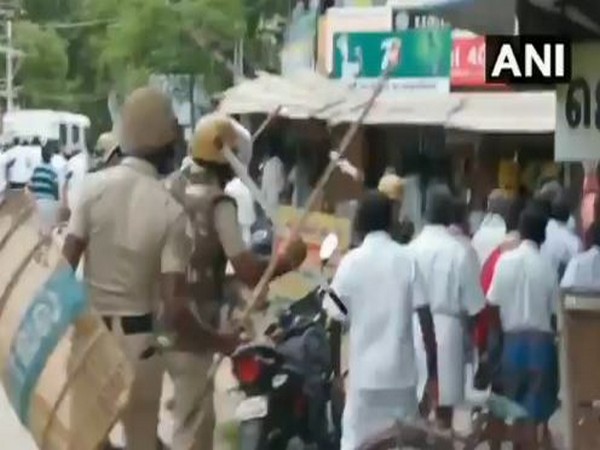 Thoothukudi (Tamil Nadu) [India], October 22 (ANI): Tamil Nadu Police have filed an FIR against 604 people from both AIADMK and DMK, including two MLAs Geetha Jeevan and Chellappa, a day after a clash broke out between the cadres of both parties while hoisting their party flags in Thoothukudi.
Vilathikulam Police had to use lathi-charge to disperse the All India Anna Dravida Munnetra Kazhagam (AIADMK) and Dravida Munnetra Kazhagam (DMK) cadres from the clash site.
Markandeyan, who recently joined the DMK after leaving AIADMK had got permission from the police to hoist the DMK flag in Vilathikulam and he was advised to hoist with 200 supporters while maintaining social distancing and adhering to COVID-19 norms.
According to Vilathikumam police official, the AIADMK cadres also gathered headed by Vilathikulam MLA Chinnappan and tried to hoist their party flag in their pole nearby without permission from the police.
“When the crowd gathered from both parties at the same premise and same time tension prevailed and police used mild lathi-charge to dispose of the AIADMK cadres since they did not get permission in which MLA was injured a bit and DSP Kalai Kadhiran got injured,” the official said.
AIADMK cadres headed by MLA Chinnappan did road roko and raised slogans against the police.
Police had a conversation with AIADMK cadres and allowed to hoist their flat at last. (ANI)

Another 26/11-like attack in India almost impossible: Rajnath Singh

Constitution balances liberty and conditions on which states can deny freedom of speech: CJI