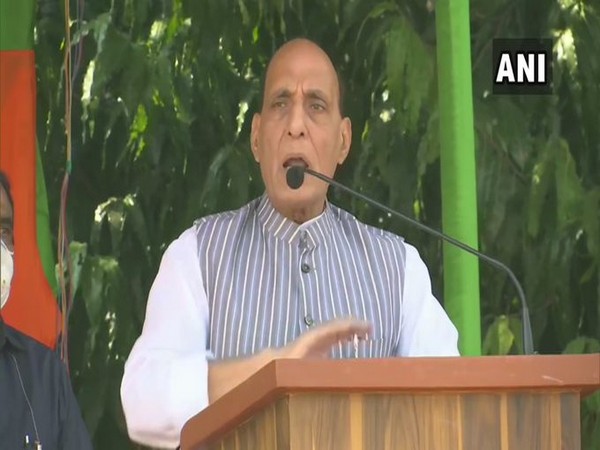 Bhagalpur (Bihar) [India], October 21 (ANI): Defence Minister and BJP leader Rajnath Singh on Wednesday slammed the Congress and RJD’s Mahagathbandhan during a public rally here in Kahalgaon ahead of the Bihar assembly election.
Singh said at the rally, “The lantern (RJD) has cracked and oil has spilled. Now, hands (Congress) and their games will not work.”
The Defence Minister said that around 25 lakh people in Bihar are receiving benefits under Ayushman Bharat Scheme, adding that in near future everyone in state will receive healthcare benefits.
“Around 25 lakh people in the state of Bihar are receiving benefits under Ayushman Bharat Scheme. There will come a time when everyone in Bihar will receive healthcare benefits from the scheme,” said Defence Minister Singh.
Congress, CPI, CPM are part of the grand alliance under the leadership of Rashtriya Janata Dal (RJD). Meanwhile, the NDA in Bihar comprises the BJP, Chief Minister Nitish Kumar’s JD(U), Hindustan Awam Morcha (HAM) and Vikassheel Insan Party (VIP)
Bihar with 243 assembly seats will go to polls in three phases: October 28, November 3 and November 7. The results will be declared on November 10. (ANI)

World sees Oscar-winning potential in ‘The…