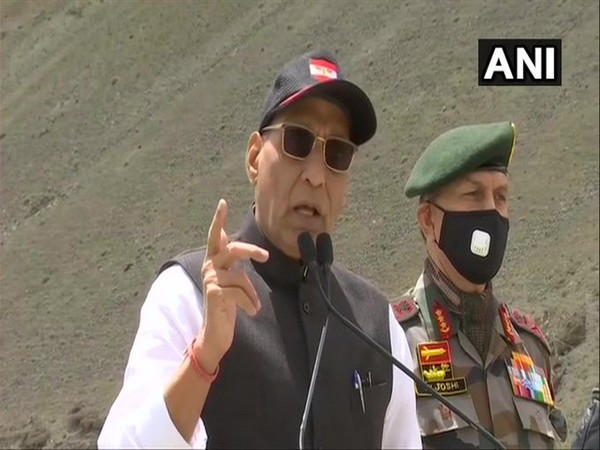 New Delhi [India], October 21 (ANI): Amid the ongoing border conflict with China, Defence Minister Rajnath Singh is likely to visit Sikkim on this Dussehra to boost the morale of troops deployed against the People’s Liberation Army (PLA).
The Defence Minister is likely to visit Sikkim on October 23-24 and also inaugurate a number of road projects and strategic bridges built for easy movement of troops and common citizens to border areas, defence sources said.
The Defence Minister is also likely to do “shastra puja” at one of the local units deployed in Sikkim near the China border as per the Hindu tradition in which arms are worshipped annually in Dushehra by warriors. Last year, he had done it in France while receiving India’s first Rafale fighter aircraft from there.
The Defence Minister may also visit the forward locations where India has deployed a large number of men and tanks to prevent any possible attempt of infiltration by the Chinese.
India and China are engaged in a standoff since April-May this year starting from Ladakh to Arunachal Pradesh in Northeast. India has deployed close to 60,000 soldiers to counter the Chinese Army which first moved troops to transgress into Indian areas in Pangong Lake and other adjoining locations. (ANI)

Coach of Kerala Express derails in Andhra, none injured