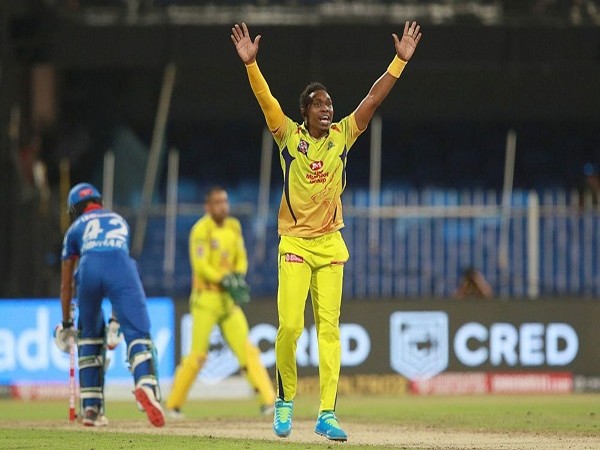 By Baidurjo Bhose
Dubai [UAE], October 21 (ANI): With four games remaining for Chennai Super Kings (CSK) in the 13th edition of the Indian Premier League (IPL), the MS Dhoni-led unit would ideally look to finish on a high. But they have been dealt another blow as Dwayne Bravo will play no further part in the tournament and is likely to fly out in the next couple of days.
Speaking to ANI, CSK CEO Kasi Viswanathan said Bravo will play no further part in the tournament and is set to head home after he suffered a groin injury during the game against Delhi Capitals at the Sharjah Cricket Stadium.
“No, Bravo isn’t playing any more part this time round and the groin injury has ruled him out. He will be flying back in a day or two,” the CEO said.
Coming into the tournament, the defending champions were expected to take the season by storm as they have been one of the most successful teams in the history of the IPL.
But they were dealt two strong blows to begin with as deputy Suresh Raina had to return home due to family reasons and ace off-spinner Harbhajan Singh too decided against flying into UAE for the 13th edition.
Asked if the absence of these two made a lot of difference as the CSK unit could for the first time end at the bottom of the points table, the CEO said decisions have always been respected in the franchise irrespective of whether a player is senior or junior.
“Undoubtedly Raina and Harbhajan are both vital cogs in the CSK unit and they were missed. But you have to respect personal decisions and that is how we function irrespective of whether it is a senior or junior player,” he explained.
Raina, one of the top run-getters in the league, flew back after having arrived in UAE with the team. His absence saw the unit try out a number of options in the middle-order, but the likes of Kedar Jadhav could not match up to Raina’s numbers.
Harbhajan though made himself unavailable from India and while that opened the doors for the likes of Piyush Chawla and Karn Sharma, the duo couldn’t make much of the opportunities handed to them.
While Chawla finished with six wickets from seven games at an economy rate of 9.09, Karn had a slightly better economy of 8.66 as he bagged four wickets from as many games.
Ravindra Jadeja, too, failing to bring home the numbers in the bowling department has hurt CSK and Dhoni’s chances as the left-arm spinner managed just 4 wickets from the 10 games that he had played.
With Bravo ruled out, CSK is likely to finally bring last year’s purple cap, Imran Tahir, into the playing XI for the remaining four games. (ANI)

ISKCON temple in Bengaluru to reopen to the public from…