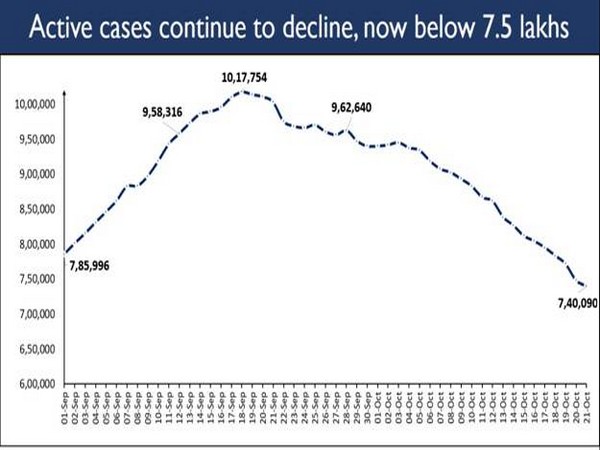 New Delhi [India], October 21 (ANI): India has sustained its trend of maintaining the active cases below the 7.5 lakh mark for the second successive day on Wednesday, according to the Union Ministry of Health and Family Welfare.
In the last 24 hours, the country has registered 61,775 recoveries whereas the new confirmed cases are only 54,044. This is when 10,83,608 tests have been conducted in the last 24 hours.
Contributing to this, 14 states/Union Territories have achieved Case Fatality Rate (CFR) of less than 1 per cent while the National Case Fatality Rate has fallen to 1.51 per cent today, said the Ministry.
The Centre has advised States/UTs to aim at bringing down the CFR to below 1 per cent.
Presently, India’s total recoveries stand at 67,95,103. The higher number of single-day recoveries has resulted in a continuous increase in the national recovery rate, which is at 88.81 per cent, the Ministry added.
Of which, 77 per cent of the new recovered cases are observed to be concentrated in 10 States/UTs. Karnataka outnumbered Maharashtra in new recovered cases with more than 8,500 new recoveries. Maharashtra and Kerala both contribute more than 7,000 to the new recoveries.
And of newly reported cases, 78 per cent are concentrated in ten States/UT. Maharashtra contributed more than 8,000 to the new cases. Karnataka and Kerala, both contributed over 6,000.
In the last 24 hours, 717 deaths have been registered and 82 per cent of which were reported from 10 states and UTs.
Based on Tuesday’s data, 29 per cent of deaths reported were from Maharashtra with 213 deaths followed by Karnataka with 66 deaths. (ANI)