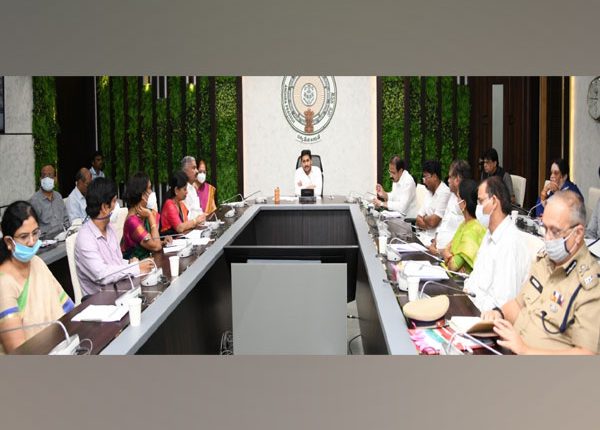 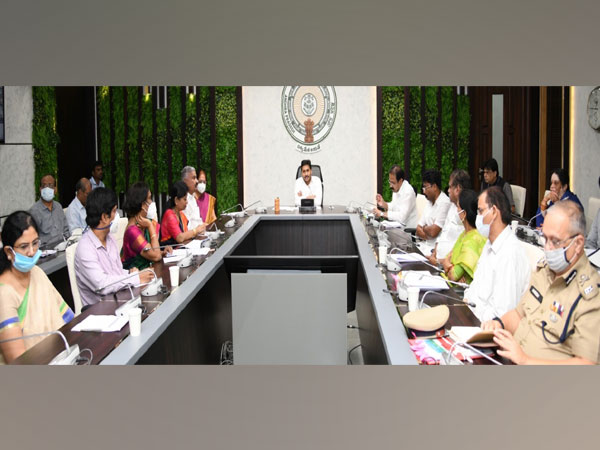 Amaravati (Andhra Pradesh) [India], October 21 (ANI): Andhra Pradesh Chief Minister YS Jagan Mohan Reddy on Tuesday directed officials to act on humanitarian grounds in dealing with people affected by floods by providing basic food supplies, financial assistance and exgratia.
Addressing district collectors and joint collectors during the ‘Spandana’ video conference, Chief Minister said that during these hard times, people expect officials to be more empathetic.
“As part of the relief measures, officials were asked to provide 25 kg rice along with 1 kg each of cooking oil, red gram, onions and potatoes. Further, Chief Minister ordered the district collectors to provide ex gratia of Rs 5 lakh to the kin of deceased at the earliest. Of the 19 deaths, 14 families were given exgratia and he told the officials to clear the remaining,” said an official release of Andhra Pradesh Chied Minister’s Office (CMO).
Chief Minister asked the officials to be on high alert and provide all help to people taking shelter in relief camps and give Rs 500 to each person in the camp while returning home. He further directed the officials to focus on restoration of power supply and repairs to damaged roads on a war-footing and also stressed on providing safe drinking water and sanitation measures.
Over 37,000 people have been rescued from flood-affected areas of Hyderabad, while 33 people have died due to the inundation caused by incessant rain over the past week, according to state government.
In regard to the crop damage, Chief Minister Jagan instructed all the joint collectors to submit report on the enumeration of crop damages due to the incessant rains by October 31, including the budget estimates for the agriculture sector. He directed the officials to provide input subsidy to farmers without leaving any eligible farmer behind and a social audit has to be done in case if any farmer was left out.
“For the first time, the state government is providing input subsidy in the same season and the Kharif subsidy will be given along with the second spell of YSR Rythu Bharosa. The total subsidy of Rs 145 Crore for June, July, August, and September including the horticulture crops will be credited on October 27. For the month of October, list out the beneficiaries and submit them by November 15. The beneficiaries of RoFR pattas, will also be provided with the YSR Rythu Bharosa,” he said.
The Chief Minister also reviewed the working stature of Village Secretariats, and NREGA works across the State. He directed the district collectors to visit village/ ward Secretariats twice a week along with Joint Collectors and other district officials, without neglecting and making it a mandatory task every week. The governance at the village level has to be efficient, leaving no scope for any sort of corruption.
On NREGA, the Chief Minister directed the officials to work keeping a target to utilize Rs 10 crore material component in a week in every assembly constituency. He instructed the authorities to take up the construction of Village and ward secretariats, RBKs, YSR Health Clinics, Milk cooling units, and Anganwadi Centres. Upon successful completion of works, an additional Rs 5 crore worth works will be provided.
He stressed on creating awareness among the farmers on electricity meters for farm connections to enhance the supply of quality power.
“The farmers will not be burdened with the introduction of Direct Benefit Transfer of free power subsidy, but will bring in more transparency and accountability into the system. The previous government left a debt of Rs 8700 Crore for agricultural use. In order to provide free power to farmers on a long term basis, the State government is bringing 10,000 MW solar plant at low cost and high sustainability,” said the Chief Minister and asked the officials to work efficiently to make the scheme a grand success.
Deputy Chief Minister Alla Kali Krishna Srinivas, Ministers Peddireddy Ramachandra Reddy, Botsa Satyanarayana, Adimulapu Suresh, Thaneti Vanita, Chief Secretary Nilam Sawhney and other officials were present in the video conference. (ANI)

World Test C’ship final: Another wash out without a ball bowled as rain continues to…

Local CBS anchor slams own network live on air over ‘discrimination’, hints at…

No outsider yet, only MoD top brass to head newly corporatized OFB on deputation

Corporate hiring to be slow till fiscal-end: Assocham

NASA knows about every eclipse in next 1,000 years