Next week’s 2+2 dialogue in Delhi will focus on challenges in Indo-Pacific region: US Defence Secretary 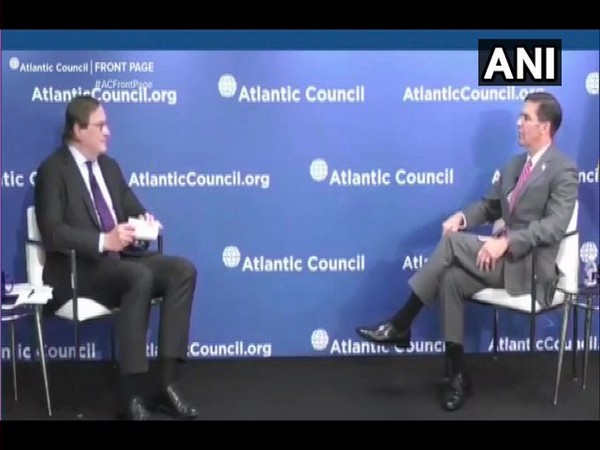 Washington [US], October 21 (ANI): The next week’s US-India’s 2+2 dialogue will be focused on challenges in the Indo-Pacific region and the ways to overcome those challenges, said US Defence Secretary Mark Esper.
Speaking during a conversation with Frederick Kempe, President of Atlantic Council on Tuesday (local time), Esper said, “Secretary Michael Pompeo and I will be there next week. It’s our second 2+2 with the Indians, the third ever for the United States and India. And it’s very important. India will well be the most consequential partner for us, I think, in the Indo-Pacific for sure, in this century.”
He further said that the countries in the Indo-Pacific region recognise what China is doing.
The Defence Secretary said that India is the world’s largest democracy with a “very capable country, a very talented people” and “they face off every day Chinese aggression in the Himalayas, specifically along that line of actual control”.
“So like so many other countries in that region–and I’ve spoken with them and also travelled from–like I said, from Mongolia all the way down south to New Zealand and Australia, from as far as Thailand to Palau and the Pacific Island countries. They all recognize what China is doing. In some cases, it’s very overt. And in many more cases, it’s very opaque what they’re doing,” he said.
“But they are putting political pressure, diplomatic pressure, and in some cases like India military pressure on countries to bend to their way. And we just can’t put up with that. We need to–we need all countries to follow the international rules-based order, to follow the norms that have served us so well. It’s not an issue about China’s rise, it’s how they rise. And that’s what we talk about in all these forums,” Esper said.
Referring to the last week’s Five Eyes forum, he said that discussions were held on “challenges in the Indo-Pacific, and how do we–how do we cooperate together? How do we confront these challenges to sovereignty, to the international rules-based order, to freedom of navigation?”
“So you see a lot more closer collaboration come out. And this will be reflected in our meetings next week in New Delhi, as well, when we travel there,” he added.
While replying to a question on whether maritime information sharing agreement will be signed with India, the Defence Secretary said, “We have a number of things we’ve been discussing with the Indians for some time. We’ve made good progress on a number of them. But we’ll release information on that when it’s appropriate.” (ANI)