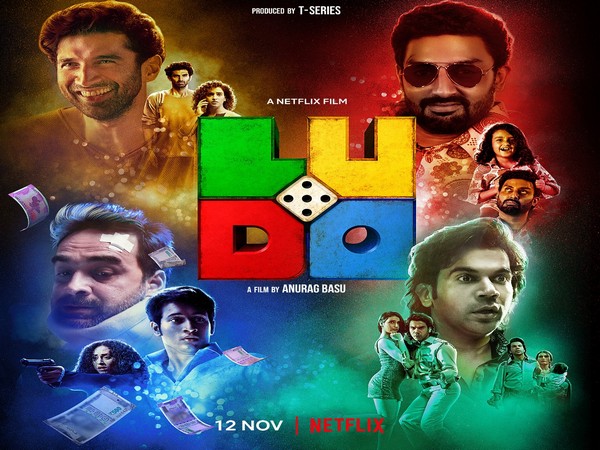 Mumbai (Maharashtra) [India], October 19 (ANI): The makers of the much-anticipated film ‘Ludo’ on Monday dropped an action-packed trailer of the film, that featured an ensemble star cast.
The interesting visuals and an impressive cast are the two things that stand out in Ludo’s trailer dropped by Netflix India on Twitter.

The two-minute-forty-eight-second trailer revolves around the lives of four people who cross paths with each other due to some twist of fate. The trailer is a blend of visuals – including gunshots, kidnapping, and a lot of action, which indicates that something is up with our protagonists.
Rajkummar Rao essays the role of a con, Abhishek Bachchan seems to be bonding with a little girl child whom he has kidnapped. Pankaj Tripathi is a goon who is seen delivering quirky dialogues and Aditya Roy Kapur’s character seems like a regular modern man with his own set of ambitions.
The trailer also shows a glimpse of Fatima Sana Shaikh, who is seen caught a web of lies and deceit. Sanya Malhotra is also seen in the film.
As Netflix India shared the interesting trailer on Twitter, they wrote, “The time has come to roll the dice. Which house are you betting on? #LudoOnNetflix.”
The Netflix movie features an ensemble cast, which boasts of names like Abhishek Bachchan, Rajkummar Rao, Sanya Malhotra, Aditya Roy Kapur, Pankaj Tripathi, Fatima Sana Shaikh, Rohit Saraf and Asha Negi.
Produced by Bhushan Kumar and Anurag Basu, the film is set to premiere on Netflix on November 12. (ANI)

Jayalaltihaa thanks Maneka, Rajinikanth for support