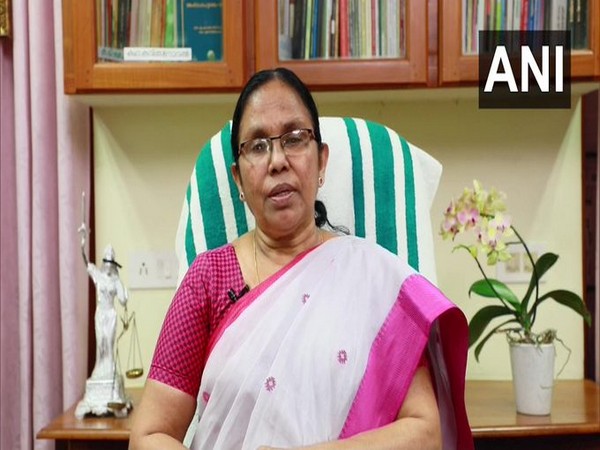 Thiruvananthapuram (Kerala) [India], October 19 (ANI): Responding to Union Health Minister Dr Harsh Vardhan’s statement on the COVID-19 situation in Kerala, State Health Minister KK Shailaja on Monday said that she called up the union minister who informed her that his words had been misinterpreted by sections of the media and what he meant was that COVID-19 cases had increased after Onam celebrations.
“Today, some sections of the media misinterpreted Union Minister Harsh Vardhan’s statement, saying that Kerala was the worst in COVID-19 prevention activities. I called him up for clarification today and he told me that he did not mention anything of the sort,” Shailaja said.
She added that he clarified that he stated that cases had increased and clusters had emerged in Kerala after Onam celebrations.
“He told me that he had said that cases had increased after Onam celebrations and clusters had emerged. This is true, we also agree with him. He used this as an example so that other states do not do the same,” she added.
“I also pointed out to him that the mortality rate was reducing in our state and he also agreed. In May, it was 0.77 per cent, then 0.45 per cent in June, 0.4 per cent in August, 0.38 pc in September and now in October, it is 0.34 per cent. This is a very low rate,” she said.
She further said that the state was working hard to save peoples’ lives and at the end that was what mattered, and that he Union Minister had always been appreciative of COVID-19 measure of the state.
“Sir has always given us inspiration and appreciated our activities several times. This time also he said that Kerala was doing a fantastic job. It is true that some people did not follow guidelines and the graph showed an increase. We are also of the same opinion. Our Chief Minister has also said the same thing,” she added.
The Union Health Minister on Sunday had cautioned people to strictly follow coronavirus guidelines and avoid being negligent, citing the example of Kerala which during Onam saw a spike in cases due to negligence.
“Kerala paid the price of gross negligence during Onam festivities as the recent spike in COVID-19 cases were seen in the state. Noting that between January 30 and May 3, Kerala had reported just 499 cases and two deaths due to COVID-19. Epi curve of Kerala changed completely due to Onam festivities across the State, the daily new cases nearly doubled,” he said. (ANI)