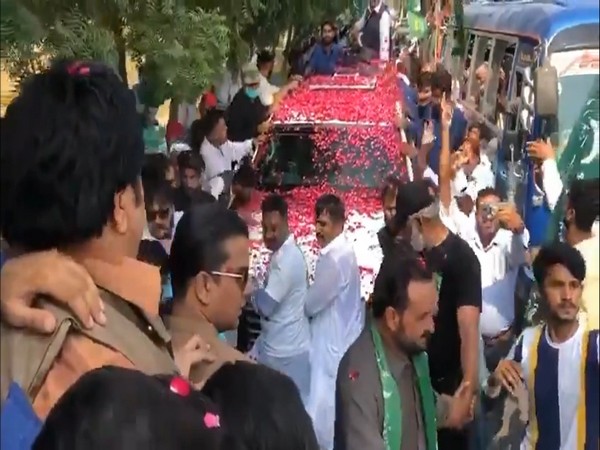 Karachi [Pakistan], October 18 (ANI): After the successful Gujranwala rally where Pakistan opposition leaders and thousands of people protested against Prime Minister Imran Khan government, the 11-party opposition alliance Pakistan Democratic Movement will hold its second power show in Karachi on Sunday hosted by the Pakistan Peoples Party (PPP).
The Pakistani Muslim League- Nawaz’s (PML-N) vice president Maryam Nawaz arrived in Karachi on Sunday afternoon and was welcomed at the airport by a large number of party workers, Dawn reported.
Hundreds of people surrounded her SUV and threw rose petals on her car while raising slogans and waving Pakistan flags.
It is her first public appearance in the metropolis. From the airport, she is headed to the Quaid’s mausoleum to offer fateha. Maryam is accompanied by former Sindh governor and PML-N leader Mohammad Zubair. Her party has claimed to have set up camps on 17 spots to welcome her.
PPP chairperson Bilawal Bhutto-Zardari said he is confident about the success of the show and eventual fall of the Imran Khan-led government.
“The PPP is going to stage a massive power show, which would tell Imran Khan what the people think about him,” Bilawal told Dawn a day before the power show. “I don’t even have a shadow of a doubt over the success of the PDM campaign,” he said
“I am frequently arguing that it’s not for our people but for the PM to panic,” said the PPP chairman. “He [Imran Khan] has seen his fate. He can no more shift the responsibility of his failures to the past government for face saving. People are asking questions and he has no answer. The people are disappointed and this would lead only in the fall of Imran Khan and his government,” he added
The opposition comprises 11 parties including PML-N, PPP, and JUI-F (Jamiat Ulema-e-Islam-Fazl). It has demanded PM Imran Khan’s resignation in the backdrop of corruption, economic slowdown, and poor governance.
The PDM hosted the first rally in Gujranwala to show the strength of their anti-government campaign. Thousands of people participated in the event which was addressed by opposition leaders including PML-N leader Nawaz Sharif.
Meanwhile, the government has hit back at the opposition, saying a government that has been elected to power, cannot be sent packing just because the opposition wanted it gone.
Speaking in Multan on Sunday, Foreign Minister Shah Mahmood Qureshi said: “This alliance, called PDM, is a temporary alliance. People consider it to be an unnatural alliance. Why unnatural? Because this movement does not have one flag, one leader or one ideology.”
“Multiple people have gathered out of fear; fear of their own doing, of their incompetence, of the cases against them which could reach a conclusion soon […] of their political trajectory,” he added. (ANI)

Sajid Mir, a notorious terrorist and shadowy figure, wanted in over half dozen countries, says report

Why did Paul Walker wanted to quit acting?