Kerala launches water taxi service in the backwaters of Alappuzha 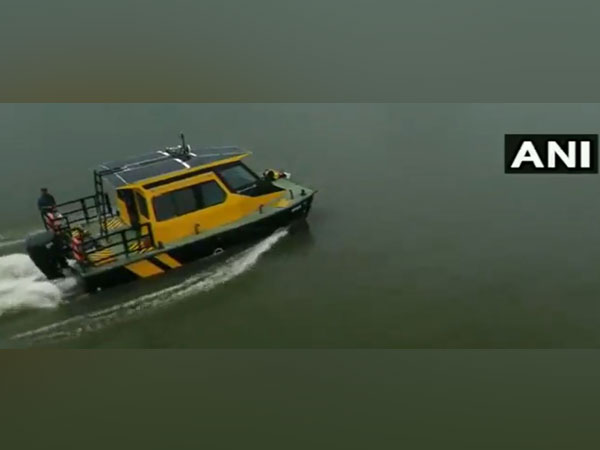 Alappuzha (Kerala) [India], October 18 (ANI): Water taxis will now ferry passengers on the backwaters of Kuttanad in Alappuzha with the state government launching its first catamaran diesel-powered craft to boost the tourism sector hit hard by COVID-19.
The water taxi, a catamaran diesel-powered craft, with a seating capacity for 10 passengers, is first in a series of four boats, that the State Water Transport Department (SWTD) is planning to introduce.
Speaking to ANI, Sandith Thandasherry, CEO of Navgathi Marine Design and Constructions Private Ltd., which built the country’s first solar ferry, Aditya, said that the water taxi was able to cruise at a maximum speed of 30 km per hour in the trial run.
“It is unique in two aspects. One in terms of service. Multiple state governments have announced starting water taxis in the past, it has been launched in Kerala now. About the boat itself, it’s a catamaran high-speed boat. All electrical machinery is powered by the sun. All auxiliary loads are powered by solar panels,” he said.
Sandith said that the boat has a seating capacity of 10, with two crew members and is highly responsive.
“It’s a highly responsive boat, with electric steering, same as the power steering in a car,” he added.
The water-taxi service is launched at a time when the state government is working on an ambitious project of Kovalam-Bekal waterway, which once complete, will run from Kasaragod to Thiruvananthapuram. Thereby, connecting the entire state through the waterway.
Benny, the helmsman of the boat is excited to be a part of the crew of state’s first water taxi. “The boat has a power steering and I am happy to have got selected for the service. I think the water taxi will definitely boost the tourism sector in the Kuttanad region,” he said. (ANI)

SC to examine if magistrate can summon police report in…

Narinder Batra threatened to throw Karate out of India: KAI…