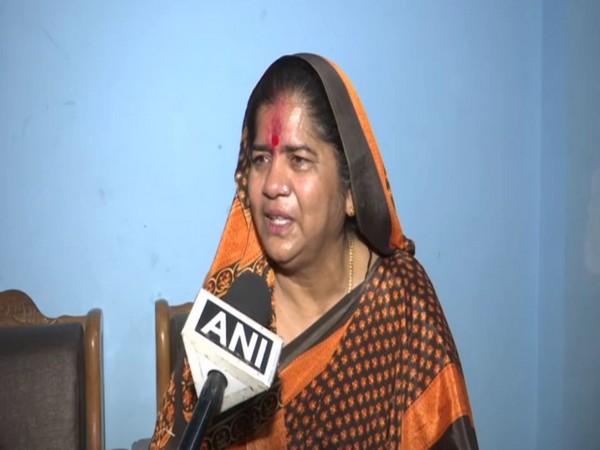 Bhopal (Madhya Pradesh) [India], October 18 (ANI): BJP candidate in the Madhya Pradesh bypoll and the target of former chief minister Kamal Nath’s “item” jibe on Sunday responded by stating that Congress leader Sonia Gandhi should dismiss such leaders and the latter should be “taught a lesson.”
“Is it my fault that I am poor and born into a Scheduled Caste (SC) family? I want to request Sonia Gandhi not to keep people like Kamal Nath in Congress. If Kamal Nath uses such a language against me then what will happen to women of SC community. How can any woman move forward?” Imarti Devi told ANI.
“I want to make a request to BJP that such people should be taught a lesson. Is it my fault that I have a name which is Imarti. I used to consider Kamal Nath as an elder brother but today he has disrespected me. I want to say to him that you are not fit for politics,” she added.
She further said that she was made a cabinet minister in the Congress government at the behest of Jyotiraditya Scindia and not Kamal Nath.
“People had made me win by 62,000 votes and Jyotiraditya Scindia had made me a minister. But Kamal Nath is a man of ill-intentions. I stayed in the Congress for 10-12 years but BJP never used bad words for me,” she said.
“Kamal Nath should be dismissed from his party. This is my request to Sonia Gandhi who is also a mother and hence should understand my pain,” she added.
Addressing a campaign rally in Dabra for Congress candidate Suresh Raje, Kamal Nath referred to Imarti Devi, who is contesting the seat on a BJP ticket as “Yeh kya item hai.”
“Suresh Raje ji hamare ummeedvar hai…yeh uske jaise nah hai…kya hai uska naam … main kya uska naam lun? …apko toh mujhe pehle savdhan karna chahiye tha … yeh kya item hai… (Our candidate is not like her… what’s her name? You know her better and should have warned me earlier… What an item!), Kamal Nath said in Hindi while the crowd hooted and called out Imarti Devi’s name.
BJP has approached the election commission against Kamal Nath and Chief Minister Shivraj Singh Chouhan hit out at the Congress leader and announced he will sit on a silent protest from 10 am to 12 pm on October 19.
“Kamal Nath Ji, this is India where when Draupadi was insulted then an entire Mahabharat war was fought and an entire family was wiped away,” Shivraj warned Kamal Nath.
He also took to Twitter to express his ire.”Kamal Nath Ji! Imarti Devi is the daughter of a poor farmer who started her career by engaging in labour in the village and today she is contributing to nation-building by working as a public servant.”
“Congress called me ‘Bhookha-Nanga’ (impoverished) and used a term like an ‘item’ for a woman. This reflects their feudal mindset,” he added.
Meanwhile, BJP MP chief VD Sharma also lashed out at the former chief minister for insulting the women of Madhya Pradesh.”
Twenty-eight assembly seats will go for by-polls in Madhya Pradesh on November 3. (ANI)

IPL 13: Ferguson was outstanding, says Morgan after Super Over win against SRH

How politics over farmers protest is playing out in Punjab…