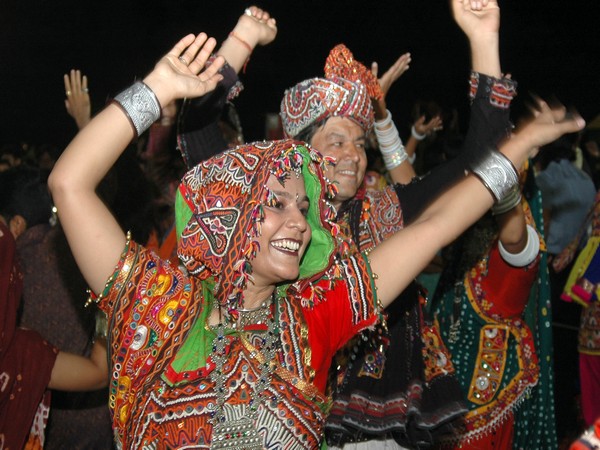 New Delhi [India], October 17 (ANI): The nine-day-long holy festival of Navratri brings in a chain of festivities, including the playful activities like that of Dandiya and Garba, which are most prominent in Gujarat and Maharashtra.
As the festival of Sharad Navratri has arrived in at the time of the coronavirus pandemic this year, most of these activities have been called off by the respective state governments considering the social distancing protocols.
ANI spoke to the members of the Garba and Dandiya organising committees from Gujarat’s Ahmedabad and Maharashtra’s Mumbai to find out how the festival will be celebrated this year in the states without the iconic practices.
Hirav Trivedi who has been organising Navratri in Ahmedabad for several years told ANI that this time the Nagar Brahmin community of the city will be performing a special ‘Baitha Garba’ to abide by the social distancing norms of the state government.
“According to the government’s protocols, there won’t be any physical activities like Dandiya or Garba this year but there is a community called Nagar Brahmin community. In which we perform the ‘Baitha Garba’ wherein garba is only sung in a seated position,” he said.
“There is no dance in this type of garba. We only sit and sing Mata Jee’s (Goddess Durga’s) devotional songs. This time we have adopted this type of Garba on society levels where we will perform this in a socially-distant manner,” he added.
Trivedi further went on to talk about how despite being economically hit by the cancellation of Navratri celebrations, the Gujaratis are happy to celebrate the festival in a socially-distant manner. “People are happy that at least they are all safe at their homes.”
“We Gujaratis wait for this festival for the entire year. This time we are into pandemic situation, it is all natural and we cannot blame anyone for it. It will hit the organisers, workers, orchestra members and others but at least we will be safe,” he said.
Mumbai’s Borivali on the other hand will see smaller pandals and online darshans for devotees to eliminate congregation of people at the pandals.
Vinod Prabhu who is a member of Navratri activities organising committee in the city told that his committee will celebrate the festival in a traditional way but will rule out Garba and Dandiya both to prevent the spread of coronavirus.
“This time, due to the coronavirus situation there will be a smaller celebration but with the same spirit. We are celebrating Navratri in a traditional way. We worship all nine forms of Maa Durga and we change the ‘swaroop’ of the devi every day according to that,” the 49-year-old organiser said.
“We are not doing Garba and Dandiya this year. We have set up a short pandal and only selective priests in volunteers will be worshipping and offering prayers to the Devi while the devotees and get an online darshan through social media,” he added.
Prabhu further said the committee will be distributing ‘prasad’ to devotees by sending it to them by post so that the spirit of the festival remains the same.
“So that the spirit of navrtri is not dampened by the pandemic, we are also distributing ‘prasad’ to the devotees by post. Since, it is an online event this time, more and more people are joining us,” he said.
“The primary thing right now is our health. Though we are not able to celebrate the festival with such fervour but we are happy that we are at least all safe at our houses,” he added.
This Navratri season will not be graced by both Dandiya and Navratri making it the first Navratri, in decades which will not be marked by these activities.
The rasas of Dandiya and Garba see devotees dressed in colourful traditional chaniya cholis and dancing to folk tunes as an offering to Goddess Durga. It is performed generally during the evenings of the nine-day-long festival, which finally culminates into Dussehra.
Devotees dance in circles and celebrate the auspicious nine (nav) nights (ratri).
Some of such events see live orchestra performing while folk singers serve as the essence in others.
Also known as Sharad Navratri, the occasion is believed to mark Goddess Durga’s victory over demon Mahishasura, signifying the victory of good over evil. (ANI)

Kareena Garg marches ahead in US pageant