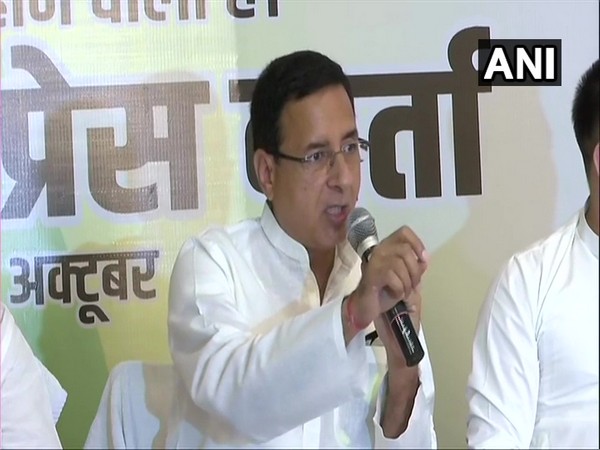 Patna (Bihar) [India], October 17 (ANI): If elected to power after the Bihar Assembly polls under the leadership of Tejashwi Yadav, the government will pass a Bill in the first Vidhan Sabha session to scrap the three “anti-farm laws”, said Congress General Secretary Randeep Singh Surjewala on Saturday.
“If we form the government, under the leadership of Tejashwi Yadav, we will pass a Bill in the first Vidhan Sabha session to scrap the three anti-farm laws. Can PM Modi and Nitish tell us that if all mandis are destroyed then how the farmers will get MSP?,” Surjewala said while launching Mahagathbandhan’s manifesto for Bihar polls.
The three laws recently enacted by the central government are Farmers Produce Trade and Commerce (Promotion and Facilitation) Act, 2020, The Farmers (Empowerment and Protection) Agreement on Price Assurance and Farm Service Act, 2020, and The Essential Commodities (Amendment) Act, 2020.
Surjewala, chairman of the party’s election management and coordination committee for the three-phase Bihar Assembly polls termed the polls as the election of condition versus plight.
“This election is the election of the new path and the new sky versus the Hindu-Muslim, this election is the election of new-age versus the experience of failure, this election is the election of self-reliance and progress versus division and hate. This election is the election of a new direction versus destruction,” he said.
RJD leader Tejashwi Yadav, Congress leader Shaktisinh Gohil and other leaders were also present during the manifesto launch event.
Promising to provide 10 lakh jobs as soon as the grand alliance is elected to power, Tejashwi said adding that his government will bear the travel expenses of the candidates going to the exam centre.
As per the manifesto of the Mahagathbandhan– Jobs will be given to 10 lakh youth in the first cabinet meeting, expense of candidate appearing for government examination will be borne by the government, infrastructure will be made world-class, a Bill will be brought in Bihar in the first Vidhan Sabha session to scrap the three “anti-farm laws”.
‘Karpoori Sahayata Shram Kendra’ will be set up across the state to help people in need. Focussing on the education sector, 12 per cent state budget will be spent on education and there will be one teacher on every 30 students in Primary schools and one teacher on 35 students in secondary school. Appointment of art, computer and sports teacher for every school. Under ‘Smart Gram Yojana’, a clinic with a doctor and nurse will be established in every panchayat, the manifesto said.
Congress, CPI, CPM are part of the grand alliance under the leadership of Rashtriya Janata Dal (RJD). In the NDA alliance, the Lok Janshakti Party(LJP) will not contest seats where BJP will be contesting, however, it will fight against Janata Dal (United). Both JDU and LJP are in a pre-poll alliance with the BJP.
Bihar with 243 assembly seats will go to polls in three phases: October 28, November 3 and November 7. The results will be declared on November 10. (ANI)

Only 10,000 devotees will be allowed each day during Navratri: Shri Kanaka Durga temple administration

Umar Gul retires from all forms of cricket

India to supply Covid vaccines to six nations; Maldives, Bhutan to be first…

PM Modi to release Rs 2,691 crore to 6.1 lakh beneficiaries of housing scheme in UP

‘They were bowled out for 36, we got 44’: Ex-Congress leader Sanjay Jha’s message for party

Male dominance is everywhere: Vijay Varma, the bad guy in…

Indian Muslims will live and die for India: Modi