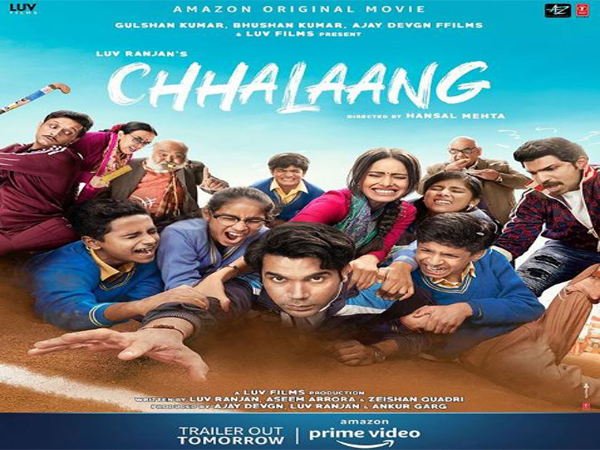 Mumbai (Maharashtra) [India], October 16 (ANI): Piquing the interests of their fans, actor Rajkummar Rao and Nushrat Bharucha on Friday shared a new poster from their upcoming film ‘Chhalaang’ and alerted fans that the trailer will be out on Saturday.
Unveiling an intriguing poster, the ‘Stree’ actor wrote on Instagram, “Get, set, Chhalaang! Trailer out tomorrow. Watch Montu Masterji and team on @primevideoin. #ChhalaangOnPrime, Nov 13.”
In the poster, Rajkummar is seen hustling on the ground as he is trying his best to reach the finish line but he is being held back by Nushrat and other children from the school. The new poster shared by Rao and Bharucha features themselves along with Mohd Zeeshan Ayyub, Satish Kaushik, Ila Arun and Jatin Sarna. In the movie, the ‘Newton’ star will be seen essaying the role of a school sports teacher.
‘Chhalaang’ was earlier scheduled for a March release, and the first poster of the film was launched in January this year. The poster mentioned the release date as March 15, however, due to the coronavirus induced lockdown, the theatres had to be shut. Therefore, the film will now release digitally.
The movie is scheduled to premiere on November 13 on Amazon Prime Video.
‘Chhalaang’ is an inspirational social comedy starring Rajkummar Rao, Nushrat Bharucha and directed by Hansal Mehta. It is presented by Bhushan Kumar and produced by Ajay Devgn, Luv Ranjan and Ankur Garg. (ANI)

Lord Hanuman has blessed people of Delhi, says Kejriwal over…