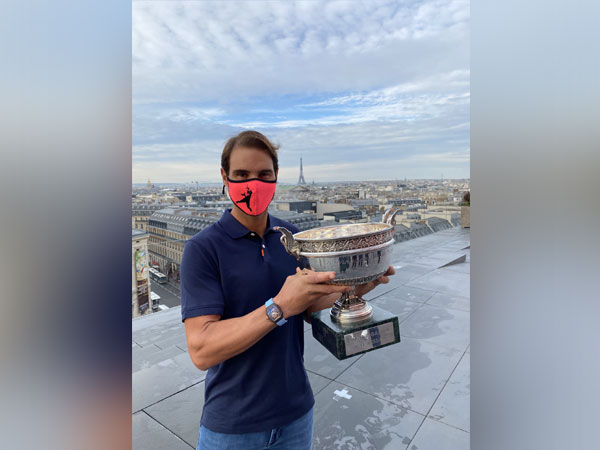 New Delhi [India], October 12 (ANI): After winning the 13th Roland Garros crown, Rafael Nadal on Monday shared a ‘nice picture’ with the trophy.
Nadal took to Twitter to share the picture and captioned the post as “Wanted to share a nice picture with you @rolandgarros #Paris #13.”
Nadal won the title after registering a win over the 2016 Fench Open titlist, Novak Djokovic of Serbia, on Sunday. He defeated Djokovic 6-0, 6-2, 7-5 to capture a record-equalling 20th major singles trophy to draw level with all-time leader Roger Federer.
Spaniard also marked his 100th match win at the clay-court major championship.
The 34-year-old is now just one-match win away from becoming the fourth player to record 1,000 career victories — and joining Jimmy Connors (1,274), Federer (1,242), and Ivan Lendl (1,068).
“I’ve played [Rafa] more than I [have] played any other player in my professional career. Our head-to-head is the biggest head-to-head ever in the history of the sport… he’s definitely my greatest rival,” ATP Tour’s Twitter handle tweeted Djokovic’s quote on Nadal.
Federer had also congratulated ‘greatest rival’ Nadal after the latter’s win.
Taking to Twitter, Federer shared a post on Sunday which read, “I have always had the utmost respect for my friend Rafa as a person and as a champion. As my greatest rival over many years, I believe we have pushed each other to become better players. Therefore, it is a true honor for me to congratulate him on his 20th Grand Slam victory.”
“It is especially amazing that he has now won Roland Garros an incredible 13 times, which is one of the greatest achievements in sport. I also congratulate his team, because nobody can do this alone. I hope 20 is just another step on the continuing journey for both of us. Well done, Rafa. You deserve it,” it added. (ANI)

Kohli urges batsmen to support bowlers ahead of third Test