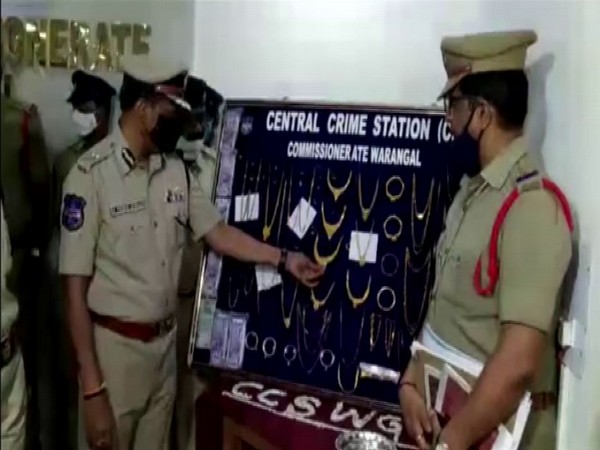 Warangal (Telangana) [India], October 9 (ANI): A house burglar has been arrested in a joint operation of the Central Crime Station (CCS) police and Warangal police on Thursday. The police have recovered stolen property worth over Rs 42 lakh, including 841.5 grams of gold, 90 grams of silver ornaments and Rs 2.88 lakh cash, from his possession.
The accused has been identified as Pittala Vinod.
“Pittala Vinod, a House Burglar who used to do robbery by targetting the locked houses has been arrested with 841.5 grams of gold worth Rs 40 lakhs, 90 grams silver and 2.88 lakh cash and the tools used by him to break into the houses.” P. Pramod Kumar, Warangal Police Commissioner said during a press conference.
The officer said that Vinod was already arrested several times in the past for breaking into houses in Secunderabad, Hyderabad, Rachakonda police jurisdiction along with Nizamabad, Kamareddy and many other places.
Pittala Vinod was released from Charlapalley jail on March 26, this year. Even after being caught several times, there has been no change in his behavior, officer P. Pramod Kumar said.
“Pittala Vinod was caught again with the combined efforts of CCS, Warangal’s Intezaar Ganj police,” he added. (ANI)

Heating in vaping device may cause lung injury, finds study