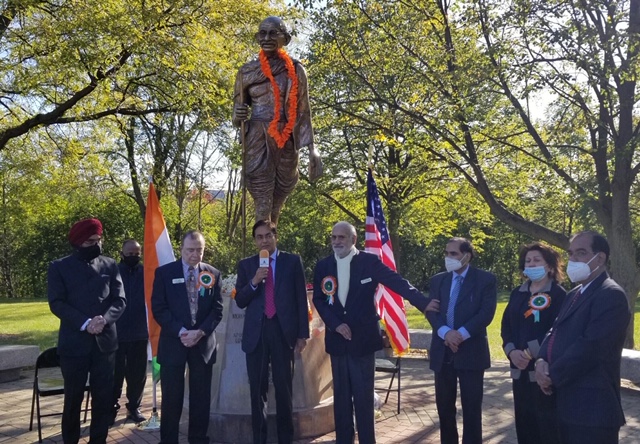 On the occasion of the 151st birth anniversary of Mahatma Gandhi, the Consulate General of India in Chicago in association with Gandhi Memorial, Chicago, organized an event in the forenoon of 2 October in the Skokie Village, which hosts the statue of Mahatma Gandhi unveiled in 2004. 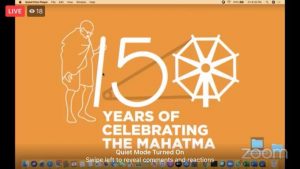 Consul General Amit Kumar paid floral tributes to Mahatma Gandhi and addressed the gathering. Gandhi ji’s life and message are of abiding relevance & continues to inspires us all. Due to Covid-19 situation, the event was scaled down and was attended by a few founding members of Gandhi Memorial including Mr. and Mrs. Omprakash Kamaria and Shri Chandra Kant Modi, and few officers from the Consulate. Consul General also presented a set of books on Gandhi ji for the library of Gandhi Memorial.

On Gandhi Jayanti, the Consulate has received several messages including from Hon’ble Member of Congress Raja Krishnamoorthi. Hon’ble Mayor of Chicago has proclaimed 2 October as the ‘Mahatma Gandhi Day in Chicago’.

The Consulate also organised a virtual event in the evening on 02 October 2020, which was streamed live on its Facebook page. Consul General Kumar addressed the viewers. The cultural programme included a mix of songs, classical dance, skit and narration paying tribute to Gandhi ji and recalling his life and message.

Besides this, as part of Gandhi Jayanti celebration, the Consulate, in association with the Gandhian Forum for Ethical Corporate, presented Gandhi Katha by Dr. Shobhana Radhakrishna, Chief Functionary at Gandhian Forum on 26 September 2020.

Why some friends make you feel more supported than others

Anupam wishes success to Sikandar on his b’day