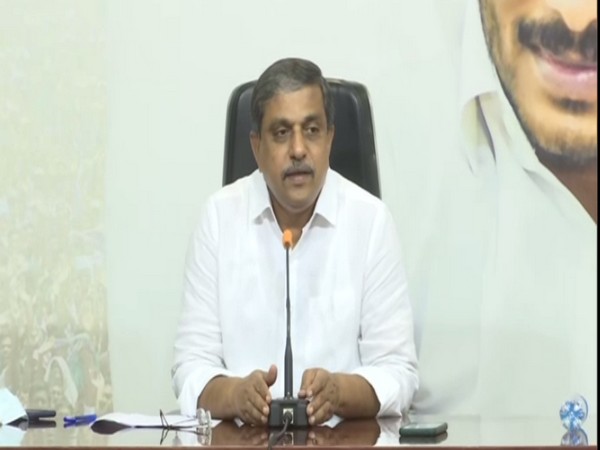 Amaravati (Andhra Pradesh) [India], October 6 (ANI): Andhra Pradesh government advisor Sajjala Ramakrishna Reddy on Monday alleged Telugu Desam Party (TDP) chief N Chandrababu was writing letters to the DGP Goutam Sawang with a malafide intention to create a false picture about law and order in the state.
Yuvajana Sramika Rythu Congress Party (YSRCP) General Secretary Ramakrishna Reddy in a press conference said, “Naidu is a failed opposition leader as he never raises issues of public interest and instead has been writing letters to DGP knowing well that he has limitations and cannot respond.”
Terming allegations that 1600 cases have been filed on the policemen as false and quoting NCRB data, Ramakrishna Reddy stated that Naidu has been writing the letter without knowing the facts and trying to ingest the same untruths to the public.
“Despite having a small number of cases filed on the police officials, Chandrababu Naidu has exaggerated the figures in the letter he said and questioned why are such untruths being propagated by Chandrababu despite his experience. In Chittoor, it was erroneously said that there were 400 cases for 4 cases and there were such typos for which corrections sent,” he said.
“Chief Minister YS Jagan Mohan Reddy had already made it clear that serious action will be taken on any officials, who are involved in any sort of crime and also stood by his word by taking action against the police officers and an inspector was also arrested. The opposition has failed miserably in the State, as the party members don’t know how to act as a responsible opposition. As the leader of the party, Chandrababu Naidu is only concerned about being in power and playing power politics. Opposition parties anywhere in the country usually fight for the public cause or by highlighting the flaws of the ruling party, but the TDP leaders act in their own way,” he added.
Naidu has written a letter to the Andhra Pradesh DGP Gautam Sawang on Monday. The letter stated that law and order in the state were deteriorating and the state is acting in violations of the fundamental rights of citizens. Chandrababu Naidu mentioned in the letter that the Andhra Pradesh tops the list in the country over the cases against the police personnel.
Chandrababu has been living in the neighbouring state for the past six months as an anonymous resident, YSRCP leader alleged.
“While the whole world recognised the effective measures taken by Andhra Pradesh during COVID without looking at the budget, TDP leaders are busy in politicizing the COVID situation. After six long months, Naidu responded over COVID situation only to become a joker. Chandrababu should stop such activities and try to bring awareness among the people,” he added. (ANI)

President Trump may not be out of the woods but exceeded hospital discharge criteria, says White House Physician

Gandhi says India in turning to Dictatorship from Democracy…