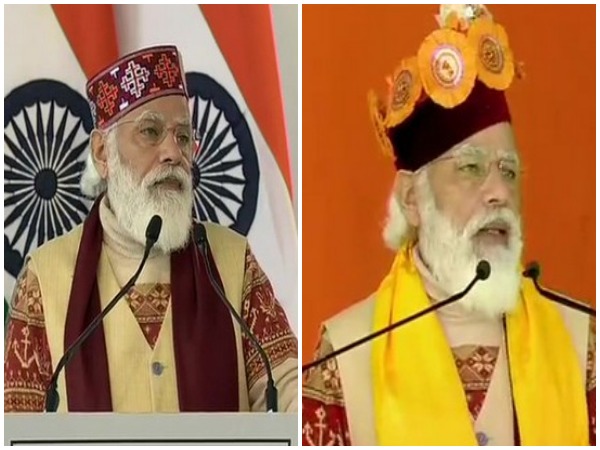 Manali (Himachal Pradesh) [India], October 3 (ANI): Prime Minister Narendra Modi on Saturday opted for traditional Himachali caps during his speeches after inaugurating the Atal Tunnel here at Rohtang.
PM Modi sported a grey coloured cap, with a maroon front that had a traditional Himachali print while he delivered an elaborate speech after inaugurating the tunnel.
He finished off the look with a pale yellow coloured full-sleeve chequered kurta that had maroon designer imprints.
However, keeping in view of the current situation created by COVID-19, he added a scarf, like a mask in maroon colour.
Shortly afterwards PM Modi addressed a public rally at Lahaul, as he donned the traditional cap, which is commonly worn by people around the area at auspicious occasions.
Modi was sported in a maroon suede cap, adorned with yellow round flowers, which were stitched across the top corner of the cap. The headgear was adorned with a white flower on the top.
He completed the look with a matching yellow scarf, which is in sync with colour of the flowers decorated in the cap.
Post the inaugration, PM Modi said the Atal Tunnel will act as a lifeline not just for a big part of Himachal Pradesh but also for Ladakh.
The Atal Tunnel, at 9.02 km is the longest highway tunnel in the world and connects Manali to Lahaul-Spiti Valley in Rohtang.
Himachal Pradesh Chief Minister Jairam Thakur, Defence Minister Rajnath Singh, Minister of State (MoS) Anurag Thakur, Chief of Defence Staff (CDS) General Bipin Rawat and Army Chief General MM Naravane were also present at the ceremony, which was held shortly after 10 am.
The tunnel will ensure movement throughout the year. Earlier, the Valley was cut off for about six months each year owing to heavy snowfall. The tunnel reduces the road distance by 46 kilometres between Manali and Leh and the time by about four to five hours. (ANI)

Many firsts from IMD in this year’s monsoon forecast

Video ‘made my blood boil’: Protesters march in Logan Square to demand justice for…

Don’t know how we will react if we win trophy, says AB de Villiers

Hope I can build it up from here on: Nortje after re-joining squad

TMC vs BJP over Mamata’s ‘audio tape’ on Sitalkuchi firing

Double masking can be potent to protect people from Covid-19: Study