IPL 13: Was nice to get Russell’s wicket, says Rabada 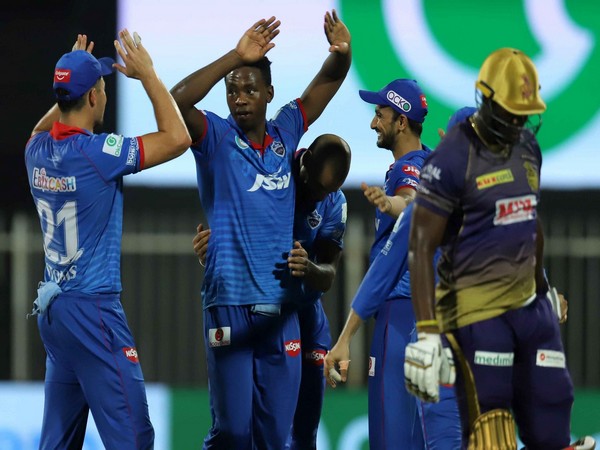 Sharjah [UAE], October 4 (ANI): After defeating Kolkata Knight Riders (KKR) by 18 runs in the Indian Premier League (IPL), Delhi Capitals’ pacer Kagiso Rabada said that he was very pleased by the wicket of all-rounder Andre Russell.
In the match against KKR, Delhi Capitals registered 228/4 in the allotted twenty overs and then restricted their opponent to 210/8, winning the match by 18 runs.
Russell had come out to bat at number four, but he could only score 13 runs with the bat in hand. He was finally sent back to the pavilion by Rabada in the 10th over.
“We started off really well, it was nice to get Russell’s wicket, we have seen in this IPL that the games are never over, the batters got us extra few runs that we could have played with, they got us extra 30 runs and at the end, that’s what won us the game. The batters won the game for us in the end,” Rabada told Delhi Capitals pacer Anrich Nortje in a video posted on iplt20.com.
However, after the wicket of Russell, Rabada proved costly as Eoin Morgan dispatched him for three sixes in the 18th over. The Proteas pacer finished with figures of 1-51 from his four overs.
Anrich Nortje was the pick of Delhi bowlers as he scalped three wickets. He dismissed Sunil Narine, Eoin Morgan, and Pat Cummins.
“I think it was skidding at the end and yeah, we were trying to execute what we had planned to. We said let’s try to hit the yorkers and find out what the wicket can offer to us. Luckily, the bouncer went nicely to Narine and then I bowled the ball at the top of off-stump to Narine and it worked, I just tried to stick to the plan against Narine,” Nortje told Rabada.
Morgan came into bat at number six for KKR and when he walked out to the crease, KKR still needed 112 runs for the win from 43 balls. He and Tripathi had formed a 78-run stand to revive KKR’s hopes of winning the match. Morgan was dismissed for 44 in the penultimate over by Anrich Nortje, but Tripathi was still there for KKR in the final over as the side needed 26 runs for the win. However, in the last over, Marcus Stoinis clean-bowled Tripathi (36) to hand Delhi a win.
In the match against KKR, Prithvi Shaw and Shreyas Iyer starred with the bat for Delhi. Iyer played a knock of 88 runs while Shaw registered 66 runs. The opening pair of Shikhar Dhawan and Shaw had also registered 56 runs in the first five overs. Eventually, Delhi posted a total of 228/4 in the allotted twenty overs. (ANI)

Lanka Premier League likely to be postponed, could be held…

Paes-Nestor enter second round at Wimbledon