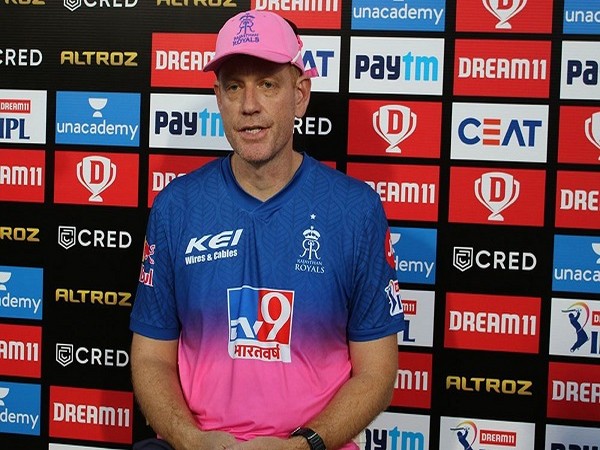 Abu Dhabi [UAE], October 3 (ANI): Rajasthan Royals head coach Andrew McDonald praised Mahipal Lomror for his gutsy knock against Royal Challengers Bangalore (RCB) on Saturday.
Opting to bat first, Royals got off to a flyer with Jos Buttler smashing boundaries early in the innings. However, Isuru Udana found an inside edge of Steve Smith’s bat and the ball went straight onto his stumps in the third over.
Three balls later, a sharp catch by Devdutt Padikkal in the slips dismissed Buttler. Star batsman Sanju Samson wicket in the next over added insult to an injury as Royals got reduced to 31/3.
However, Lomror revamped Royals’ innings with his gutsy knock. He scored a well made 47 off 39 balls and enabled Rajasthan Royals to a respectable total of 154 runs.
“We backed him in the middle order to the job against RCB’s spin bowling. He did a fantastic job. It is always difficult to play in the first game of the tournament but he prepared well,” said McDonald during the post-match press conference.
England cricketer Ben Stokes is set to join his team Rajasthan Royal and coach McDonald feels that the inclusion of all-rounder in the side will force a change in playing XI.
“We have Rahul Tewatia and Jofra Archer has also given some option at death. So we feel the preparation was good but it’s about settling for the best side,” said the Royals coach.
“When it comes to the selection of team we will pick the best XI. We had some changes earlier in the tournament. Clearly, when Ben Stokes will arrive it will potentially force the change in the playing XI and it will also change the formation how we play,” McDonald added.
RCB defeated Rajasthan Royals by eight wickets on the back of opener Devdutt Padikkal and skipper Virat Kohli brilliant knocks.
Royals will next lock horns with Mumbai Indians on Tuesday. (ANI)

IPL 13: Want to give Russell more time in the middle, says Dinesh Karthik

I feel scared to raise a point in my film: Karan Johar