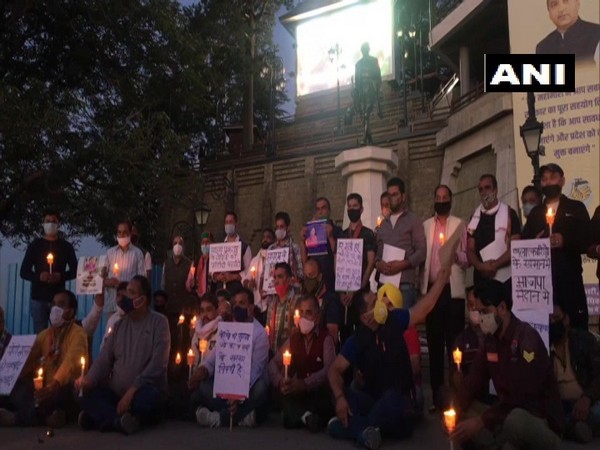 Shimla (Himachal Pradesh) [India], October 1 (ANI): Workers of the Congress on Wednesday held a candlelight vigil in Shimla demanding justice for Hathras gangrape victim.
Workers of the Congress and members of the National Students Union of India marched towards the Mahatma Gandhi statue in the main city square.
The protestors were seen with banners that read, “The government that couldn’t save our daughters is useless.”
President of District Congress Committee (Urban) Jitendra Chaudhary, while speaking to ANI alleged that the administration “tried to play down the matter”.
“The girl was admitted to a hospital in Delhi when her condition had worsened. It is saddening that the girl passed away. What is even more troublesome is that the body was brought to Hatras by the police and last rites were performed. As per media reports, it was also noted that the family was locked inside the house when the last rites were performed,” he said.
Chaudhary further hit out at the Yogi Adityanath government accusing him of “jungle raj” in Uttar Pradesh.
Kritika Sharma, a local student said that “through this candlelight vigil, we have lit a fire and hope that this fire enlightens the minds of people to change their perception against women”.
Congress interim President Sonia Gandhi on Wednesday attacked the Yogi Adityanath government over the death of the Hathras gangrape victim, saying she “did not die but was murdered by the ruthless government” and “her body was consigned to flames forcibly”.
Uttar Pradesh government on Wednesday announced that kin of the Hathras gangrape victim will be given Rs 25 lakh as ex-gratia and a house, and a government job will be given to a member of the family.
The government has formed a three-member SIT to probe the case and said the matter will be heard in the fast track court.
Uttar Pradesh Chief Minister Yogi Adityanath spoke to the family of the victim through video conferencing.
The victim died in Safdarjung Hospital on Tuesday. She was brought to the hospital on Monday from Aligarh Muslim University Medical College.
The last rites of the Hathras gang-rape victim were performed at her native place in the wee hours of Wednesday. All the four accused involved in the incident have been arrested. (ANI)

Is MUDA a new hope for Malaysian politics?

Gita as subject in schools: HC junks plea as ‘vague’

After day of clashes, farmers offered protest site at Burari

No place for disruption, be it in Parliament or state assemblies: LS Speaker Om Birla

Centre ready to discuss all issues with farmers: Tomar

IPL 13: Mumbai Indians outplayed us in all three…

Anil Vij bats for inclusion of Yoga in sports