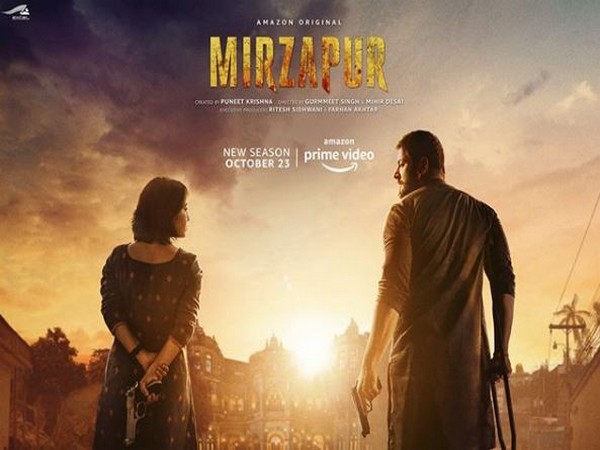 Mumbai (Maharashtra) [India], September 30 (ANI): After piquing the curiosity of fans on by releasing a grim poster of ‘Mirzapur Season 2’, the makers of the web series dropped a new intriguing poster featuring Ali Fazal and Shweta Tripathi.
“They’re back, but from this point, there’s no looking back,” wrote Amazon Prime Video on Instagram.

The new poster highlights Golu (Shweta Tripathi ) and Guddu (Ali Fazal), ready to take on the battlefield. The poster features the duo looking at each other while they hold guns in their hands. In the front is the poster also features the iconic Haveli (castle) of Kaleen Bhaiya (Pankaj Tripathi).
The show features Pankaj Tripathi, Vikrant Massey, Shriya Pilgaonkar, Shweta Tripathi, Rasika Duggal and Kulbhushan Kharbandha in the lead.
Earlier, with Season 1 of the show streaming on the platform, Amazon Prime Video made its first season available to everyone including those who have not subscribed to the video streaming platform.
Fascinating viewers in a terrific first season, the show featured Pankaj Tripathi, Ali Fazal, Vikrant Massey, Shriya Pilgaonkar, Shweta Tripathi, Rasika Duggal and Kulbhushan Kharbandha in the lead.
While Tripathi stole the show essaying the role of Kaleen Bhaiyya, the King Of Mirzapur, Ali Fazal & Vikrant Massey packed a punch as Guddu and Bablu Pandit – the wannabe gangsters.
Joining them in Season 2 are Vijay Varma, Priyanshu Painyuli, Isha Talwar, Amit Sial, Anjum Sharma.
With all eyes firmly fixed on what happens next on the show, the makers have kept everyone’s curiosity high by not revealing much about the story.
Produced by Farhan Akhtar and Ritesh Sidhwani under their banner Excel Media & Entertainment, the second season of Mirzapur will premiere on October 23 on Amazon Prime Video. (ANI)