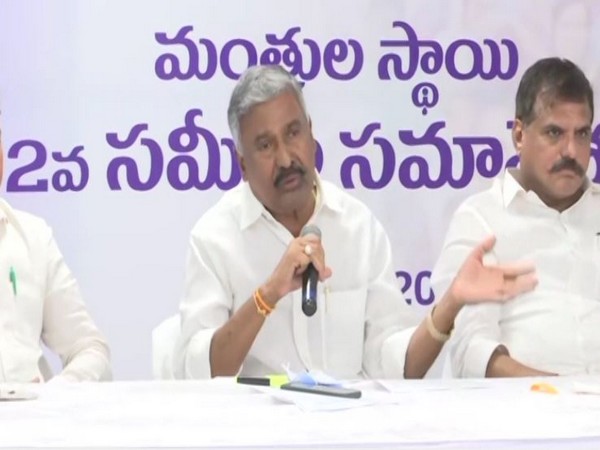 Amaravati (Andhra Pradesh) [India], September 29 (ANI): Andhra Pradesh Panchayat Raj and Rural Development Minister Peddireddy Ramachandra Reddy on Tuesday denied the allegations by TDP chief N Chandrababu Naidu about his involvement in the attack on the brother of Judge Ramakrishna in B Kothakota of Chittoor district on Sunday.
Speaking to reporters, the Minister said that Judge Ramakrishna is supporting TDP, and that is why he is making allegations about his involvement in the matter.
“Pratap Reddy was going in a car in the market area of B Kothakota and had a verbal altercation with a street hawker. Ramachandra who was buying fruits at that hawker interfered, and there was a clash between Ramachandra and Pratap Reddy. Neither of them knew about the other one. Whereas Ramachandra is the brother of a judge Ramakrishna, Pratap Reddy is a local TDP worker. The police filed a case in this regard. Ramakrishna is a Dalit judge suspended more than a decade ago, and he is backing TDP now. That’s why TDP and the suspended judge are making allegations against me,” he said.
Reddy said that TDP chief N Chandrababu Naidu has been trying to malign his image by using Ramakrishna for a long time.
“Now also he started a scathing attack on me without knowing the details properly. No one in the clash incident is related to YSRCP. But NCBN wants to show that me and my party YSRCP are against Dalits. But his attempt has failed as both the parties in the clash incident belong to TDP only,” he said. (ANI)

Javelin champ Yego to train in S. Africa for Olympics