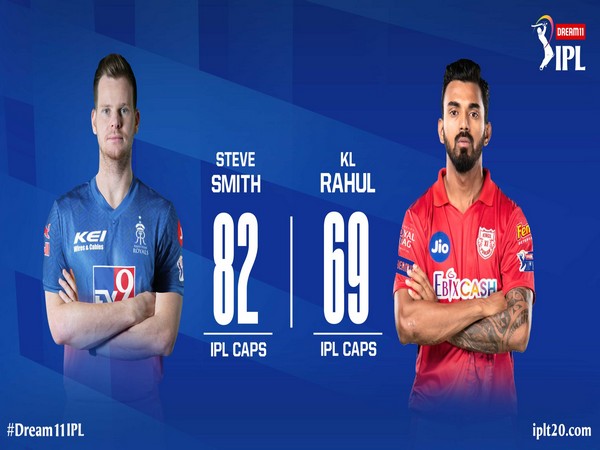 Sharjah [UAE], September 27 (ANI): Rajasthan Royals won the toss and opted to field first against Kings XI Punjab in the Indian Premier League (IPL) here at the Sharjah Cricket Stadium on Sunday.
Kings XI Punjab are high on confidence as they registered a massive 97-run win against Royal Challengers Bangalore in their previous match. Rahul-led side has so far played two matches in the league and had suffered a defeat in the first match against Delhi Capitals in the Super Over.
In the last match, Rahul had played an unbeaten knock of 132 runs off just 69 balls as he helped his side post a huge target of 207 for the Virat Kohli-led RCB. With this knock, Rahul had also achieved the highest individual score by an Indian player in the IPL.
Rajasthan Royals, on the other hand, are playing their second game of the season and had witnessed a good start in this year’s IPL. The team had defeated Chennai Super Kings in their opening match by 16 runs.
Rajasthan Royals have made two changes in the team, bringing Jos Buttler and Ankit Rajpoot in the team in place of Yashasvi Jaiswal and David Miller. Kings XI Punjab decided to field the same playing XI as their previous match.
Rajasthan Royals Playing XI: Jos Buttler, Steven Smith(c), Sanju Samson(w), Robin Uthappa, Rahul Tewatia, Riyan Parag, Tom Curran, Jofra Archer, Shreyas Gopal, Jaydev Unadkat, Ankit Rajpoot.
Kings XI Punjab Playing XI: Mayank Agarwal, KL Rahul(w/c), Nicholas Pooran, Glenn Maxwell, Karun Nair, Sarfaraz Khan, James Neesham, Murugan Ashwin, Ravi Bishnoi, Mohammed Shami, Sheldon Cottrell. (ANI)