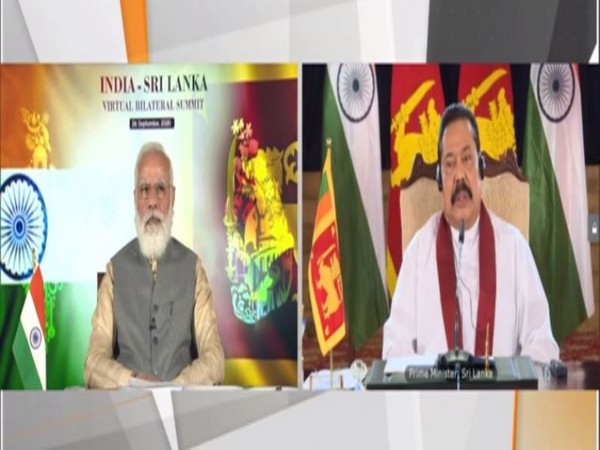 New Delhi [India], September 26 (ANI): Sri Lankan Prime Minister Mahinda Rajapaksa on Saturday extended gratitude to India for providing support to people around the world amid the COVID-19 pandemic.
“I am grateful to India for providing support to people around the world during this COVID-19 pandemic,” said Sri Lankan PM, in his opening remarks at the virtual bilateral summit.
“This is my first summit after becoming the Prime Minster,” he added.
Talking about the recent rescue operation conducted by the Indian Navy, he said, “The operation to douse off the fire on MT New Diamond ship provided an opportunity for greater cooperation between the two countries.”
Prior to Rajapaksa’s remarks, Prime Minister Modi said India has always given priority to Sri Lanka under its Neighbourhood First Policy and Security and Growth for All in the Region (SAGAR) doctrine, adding that relations between the two countries are thousands of years old.
He thanked the leader for accepting his invitation.
“The relations between India and Sri Lanka are thousands of years old. According to my government’s Neighbourhood First policy and SAGAR doctrine, we give special priority to relations between the two countries,” said PM Modi.
This virtual bilateral summit was PM Modi’s first such virtual engagement with a neighbouring country and also PM Rajapaksa’s first diplomatic engagement with a leader of a foreign country after he was sworn in as the Prime Minister on August 9, 2020.
Prior to the virtual summit, the state visits of President Gotabaya Rajapaksa and PM Rajapaksa to India had taken place in November 2019 and February 2020 respectively. (ANI)