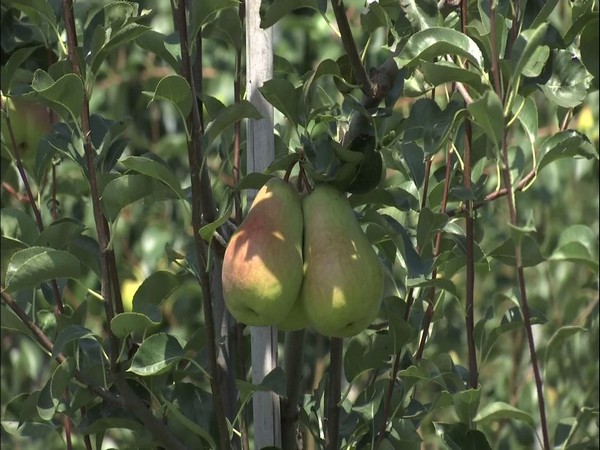 Srinagar (Jammu and Kashmir) [India], September 26 (ANI): The new high-density plant varieties of pear, which are introduced by the scientists of Sher-e-Kashmir University of Agricultural Sciences and Technology (SKUAST) are revolutionising the horticulture sector.
These new varieties are expected to benefit the growers in Kashmir by boosting the growth of pears.
According to scientists, these new varieties and high-density plants have a good capacity to give large quantities of fruit within a short period of time compared to traditional plants.
The scientists are monitoring experimental fields where they have planted a good number of high-density pear trees.
Speaking to ANI, Dr Khalid Mushtaq, Head Division of Fruit Sciences SKUAST said, “Usually the person who sows pear plants cannot enjoy its fruits. It is enjoyed by his future generations. The new high density plant variety can bear fruit faster in 2-3 years.”
“In Kashmir, we have 50,000-60,000 hectares of area. We had experimented on apples and on similar lines, we have done another experiment on pears in 50,000-60,000 hectares of area. We have grown exotic varieties of pear as part of our experiment,” Mushtaq added.
Suhail Mushtaq, a B Sc student at the university said, “There are four high-density varieties of pear, which are Early Desire, Lucas, William Barttlet and Conference. These varieties are not available in the local market and are mid-season variety with different taste and yielding capacity. These features of pear have increased the demand in the market.”
Dr Khalid further said, “We are in the fourth year of the experiment and as expected, we are now able to produce around 25 metric tonnes per hectare. In the next couple of years, we are expecting to grow 45-50 metric tonnes per hectare of produce.”
“Budgam area is prominently known for growing fruits like pears. The farmers are interested in taking the high-density variety of pear,” he added.
A number of people are visiting to see the new technologies introduced by scientists of SKUAST.
Inam Mir, a plant grower said the Conference variety has comparatively higher Total Soluble Solids (TSS) content while the Early Desire variety is red in colour. The TSS content makes the fruits taste sweeter and crispy in texture.
“The demand for this (Conference) variety is very high. If produced locally can also help in economic satisfaction to us,” Mir added. (ANI)