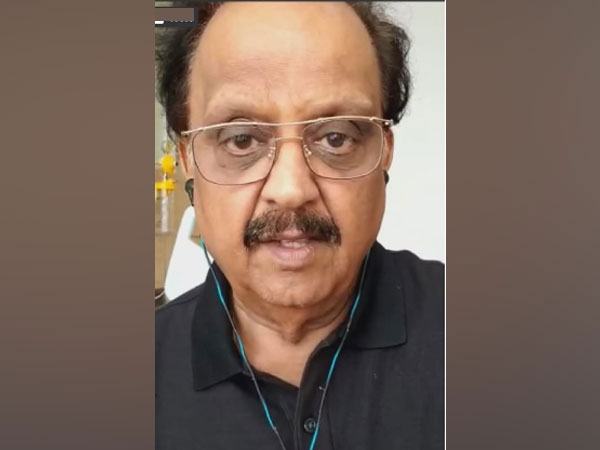 New Delhi [India], September 25 (ANI): As playback legend SP Balasubrahmanyam breathed his last on Friday, several Bollywood celebrities, including singer Lata Mangeshkar, expressed grief over his demise.
“Pratibhashaali gayak, madhurbhashi, bahut nek insan SP Balasubrahmanyam ji ke swargwas ki khabar sunke main bahut vyathit hun,” tweeted Lata Mangeshkar.
“Humne kai gaane saath gaaye, kai shows kiye. Sab baatein yaad aarahi hain. Ishwar unki aatma ko shanti de. Meri samvedanaayein unke pariwar ke saath hain,” her tweet further said.
AR Rahman posted a picture of himself with SP Balasubrahmanyam and wrote, “#ripspb …Devastated.”
“Great human being and an incredible singer…lucky to have had him dub for me…give his voice to my performances in my first Telugu and Kannada film,” tweeted Anil Kapoor along with a picture of the departed musician.
“SP Balasubrahmanyam will be missed truly…my heartfelt condolences & prayers to the family,” he further said in his tweet.
Hema Malini termed the demise of the musician as the “end of an era” as she condoled his demise on Twitter.
“End of an era! Versatile musical genius passes away. SP Balasubramaniam succumbs to the terrible covid virus after a prolonged battle in hospital. God give him peace. He will be missed by all,” she tweeted.
Riteish Deshmukh posted a picture of the late singer on Twitter and wrote, “Hum bane tum bane – ek dooje ke liye. #SPBalasubrahmanyam ji -thank you for the amazing music: -with a heavy heart I say.”
“Saathiya ya saathiya ya tune kya kiya? Rest in glory Sir. Condolences to the family, loved ones & millions of fans world over,” he further said.
Akshay Kumar shared a collage of SP Balasubrahmanyam and his picture and penned a note with it.
“Deeply saddened to hear about the demise of Balasubrahmanyam ji. Just a few months back I’d interacted with him during a virtual concert in this lockdown,” tweeted Kumar.
“He seemed hale, hearty & his usual legendary self…life is truly unpredictable. My thoughts & prayers with his family,” he added.
After over a month-long battle at the Intensive Care Unit of MGM Healthcare, Chennai, SP Balasubrahmanyam passed away on Friday.
The late musician’s son SP Charan told reporters that his 74-year-old father breathed his last at 1:04 pm today. (ANI)

Atalanta becomes 4th Serie A club to own stadium