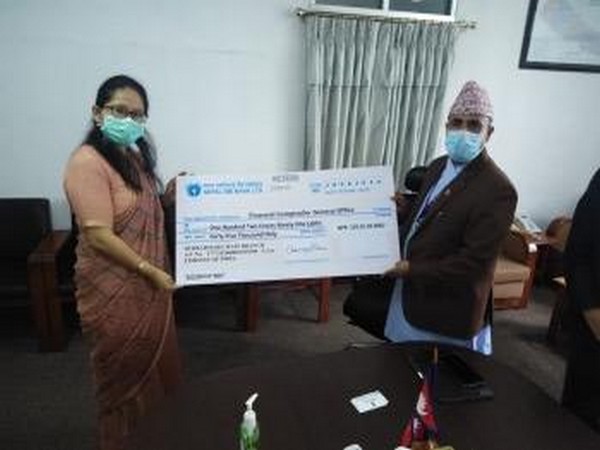 Kathmandu [Nepal], September 24 (ANI): India has released 1.54 billion Nepali rupees (approximately INR 96 crores) to Nepal towards housing and school sector assistance under the Indian government’s post-earthquake reconstruction commitment in the Himalayan country.
Namgya Khampa, Deputy Chief of Mission of Embassy of India, handed over cheques worth 1.54 billion Nepali rupees to Sishir Kumar Dhungana, Secretary, Ministry of Finance of Nepal on September 22, the Indian Embassy in Kathmandu said in a statement on Thursday.
“With this handover, India has reimbursed about USD 72 million from grant to the Government of Nepal for housing sector reconstruction. Out of Government of India’s commitment to rebuild 50,000 houses in Gorkha and Nuwakot districts, 92 per cent of the houses have been completed,” the statement said.
Similarly, the Government of India has committed support for the reconstruction of 70 schools and one library under USD 50 million grant assistance.
Out of this, the first tranche of USD 4.2 million for ongoing schools was reimbursed to the Government of Nepal, it added.
India has committed USD 150 million in grant and Line of Credit towards housing sector projects supported by it.
“Government of India remains committed to continue supporting the people and Government of Nepal in their post-earthquake recovery efforts,” the statement said.
In April 2015, a devastating earthquake measuring 7.8 on the Richter Scale rocked Nepal, claiming the lives of nearly 9,000 people and injuring more than 20,000 others. Since then, India which came to the neighbouring country’s assistance following the natural disaster has committed to supporting the reconstruction projects in the Himalayan nation. (ANI)

Your neighborhood may raise your risk of chronic kidney disease

Marlon Wayans, Neal H. Moritz team up for ‘Ride or…

Who inspired Hrithik Roshan to be strong ?