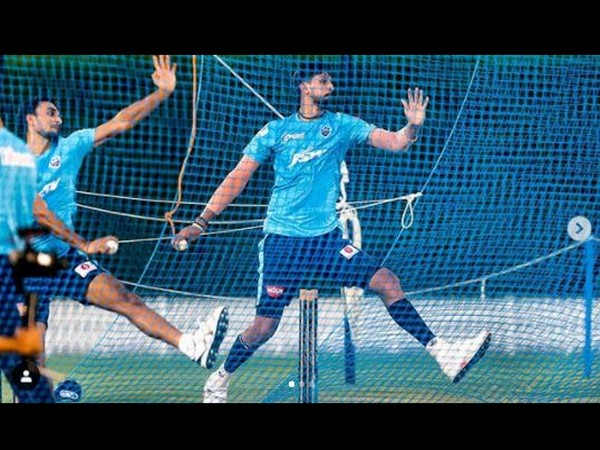 By Baidurjo Bhose
Dubai [UAE], September 23 (ANI): Delhi Capitals pace spearhead Ishant Sharma is set to skip a match or two after suffering a back spasm ahead of the first game of the season against Kings XI Punjab at the Dubai Cricket Stadium. The management isn’t keen on rushing him back as the 13th edition of the league has only just started.
Speaking to ANI, a member of the Delhi Capitals team management said that while it was an unfortunate case of a back spasm, the unit doesn’t wish to rush him in keeping in mind the long season and the weather conditions.
“He will ideally need a little time and may miss a game or two. We will not risk Ishant and rush him into the XI so early in the season. The games have only begun and he is a vital cog going into the middle and business end of the tournament,” he said.
Asked if the injury was due to the workload after the COVID-19 break, he said spasms can happen at any time and can also affect a batsman in the nets.
“No, it has nothing to do with returning to training after the pandemic-induced break. He had been training constantly during the break so that is not the case. Also, injuries happen to sportspersons all the time. Even a batsman can suffer spasms while batting at the nets. He was assessed immediately by the physio and necessary measures were taken,” he explained.
Delhi will next take on last year’s runners-up Chennai Super Kings in their next game at the Dubai Cricket Stadium on Friday. In their third game, they will play Sunrisers Hyderabad at the Sheikh Zayed Stadium in Abu Dhabi on September 29.
In their first game, Kagiso Rabada bowled brilliantly in the Super Over to take Delhi Capitals home after the game against KXIP ended in a tie.
While Rabada was brilliant with the ball, questions were raised on the quality of umpiring after Nitin Menon deducted a run from KXIP’s score in the 19th over as he thought the batsman didn’t drop the bat inside the crease while going for a second run. The team management did bring the matter up with match referee Javagal Srinath as they felt that one run cost them the game.
Co-owners Ness Wadia and Preity Zinta have both requested for the quality of umpiring to be improved as the IPL is one of the premier domestic tournaments in world cricket. (ANI)