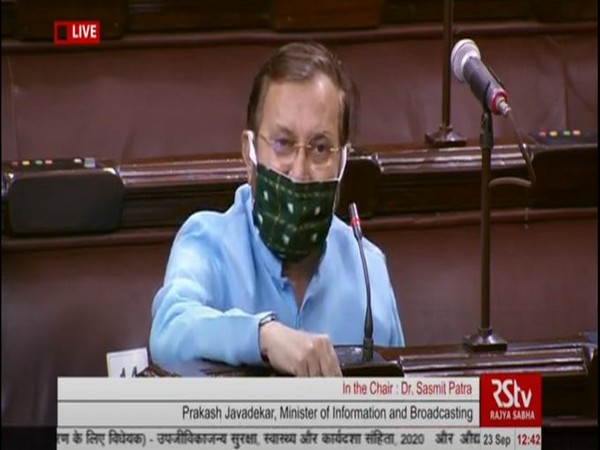 New Delhi [India], September 23 (ANI): The absence of Opposition members from the house when the bill that assures wage, social security and health security to fifty crore labourers is being brought shows they are distanced from public, said Union Minister Prakash Javadekar on Wednesday.
The Union Minister said this while discussions on three Bills namely, Occupational Safety, Health and Working Conditions Code, 2020, the Industrial Relations Code, 2020 and the Code of Social Security, 2020, were underway in the Upper House.
The three were later passed by a voice vote in the Rajya Sabha.
“73 years after independence, labourers are getting the right they had been waiting for. The Bills guarantee wage, social and health security. When a Bill that assures wage security, social security and health security to 50 crore labourers has been brought, the Opposition is absent because they are distanced from the public,” Javadekar said.
He congratulated Prime Minister Narendra Modi and Labour Minister (Independent Charge) Santosh Gangwar for bringing these “historical bills”.
Minister of State (MoS) Social Justice and Empowerment Ramdas Athawale also supported the three Bills and thanked Gangwar them.
The Rajya Sabha, earlier today passed the Bilateral Netting of Qualified Financial Contracts Bill, 2020, and the FCRA amendment bill by voice votes following discussions.
While the Bilateral Netting of Qualified Financial Contracts Bill, was moved by Union Finance Minister Nirmala Sitharaman, the FCRA amendment Bill was moved for passing by Minister of State (MoS), Home Affairs, Nityanand Rai in the House. (ANI)

‘Judwaa 2’ to release next year

Jan Abhiyan is a step to bring governance to the doorsteps…