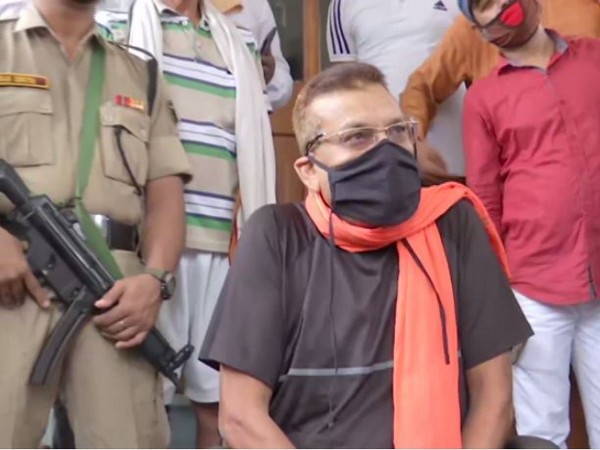 Patna (Bihar) [India], September 23 (ANI): Gupteshwar Pandey, who stepped down as Bihar Director General of Police (DGP) on Wednesday said there is no correlation between the Voluntary Retirement Scheme (VRS) taken by him and Sushant Singh Rajput’s death case.
Pandey quit as DGP after his request for voluntary retirement was approved on Tuesday by the Bihar government, which waived a three-month mandatory cooling-off period.
“There is no correlation between Sushant Singh Rajput and my VRS. I have helped a senior citizen and helpless father who want to have justice for his son. Based on the FIR by Bihar Police, the Supreme Court took the decision to transfer the case to the Central Bureau of Investigation (CBI) and court held that the FIR registered in Patna over the actor’s death was legitimate,” Pandey said during a press conference here.
While commenting upon his statement where he had used the word ‘aukat’ for Bollywood actor Rhea Chakraborty, Pandey said, “Aukat means Stature. I have said that Bihar Chief Minister Nitish Kumar is sitting on a constitutional post. I said that a person who has been accused of murdering Sushant Singh Rajput should not comment on any person holding a constitutional post.”
“I protested and made comments as our officers were badly treated by Mumbai Police. I fought for the pride of Bihar, for the justice of Sushant and CBI is investigating the case,” he added.
Rajput found dead on June 14 at his Mumbai residence.
Mumbai Police had declared it a case of death by suicide. However, Rajput’s father, KK Singh registered an FIR in Patna under sections related to abetment to suicide and later demanded a CBI investigation.
On August 19, Supreme Court had directed the CBI to investigate the case while holding that the FIR registered in Patna over the actor’s death was legitimate.
The agency has registered a First Information Report (FIR) against actor Rhea Chakraborty and others in connection with the Rajput’s death after the Centre accepted Bihar government’s recommendation to transfer the probe in the matter from Patna. CBI is currently probing the actor’s death case.
The Enforcement Directorate had on July 31 registered an Enforcement Case Information Report in the late actor’s death case after an FIR was filed by Rajput’s father against Chakraborty in Bihar on July 28.
The Narcotics Control Bureau (NCB), which is probing the drugs case related to the Rajput’s death has arrested several people in the case including Chakraborty, her brother Showik, Abdul Basit Parihar, Zaid Vilatra, Dipesh Sawant and Samuel Miranda.
The NCB had launched an investigation after it received official communication from Enforcement Directorate, in which there were various chats related to drug consumption, procurement, usage and transportation in connection with Rajput’s case. (ANI)