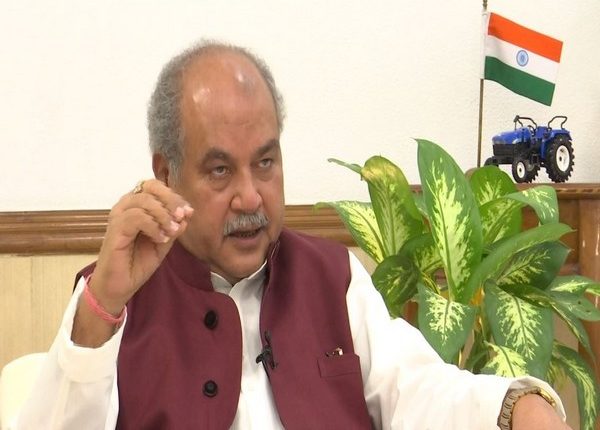 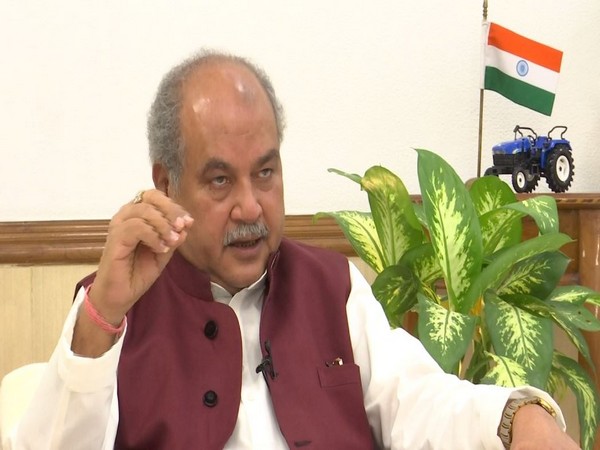 By Smita Prakash
New Delhi [India], September 24 (ANI): The new agriculture Bills passed recently by the Parliament will lessen the distance between the trader and farmers, said Union Agriculture Minister Narendra Singh Tomar.
“Farmers know about their rights. Those politicians and farmer leaders who think that they are expert are not so. Farmers understand everything and know who will purchase his produce. As the traders have to purchase the produce, and when the produce will not come in mandi, the traders will be forced to visit farmers’ village and they will develop cordial relationship with farmers and purchase farmers’ produce,” Tomar said in an exclusive interview with ANI.
“If a trader will visit a village farmers of that village will assemble at one place to sell their produce. Trader will fix the rate of purchase after discussing with farmers. The trader will purchase the produce and will take that away in a truck. Farmers will not be needed to go anywhere to sell his produce,” he added.
The Parliament recently passed Farmers’ and Produce Trade and Commerce (Promotion and Facilitation) Bill, 2020 and Farmers (Empowerment and Protection) Agreement on Price Assurance and Farm Services Bill, 2020 and The Essential Commodities (Amendment) Bill, 2020. While the government hails these reform Bills, the Opposition maintains that the legislations are not farmer-friendly.
Tomar said the new Bills will give freedom to farmers and will save their money.
“Small farmers fail to bring their produce in mandi fearing that logistic costs will reduce his chances of getting benefits. Sometimes, when they bring their produce to mandis, they even do not able to get benefit of the MSP (minimum support price) given by the government. We are now giving them freedom to sell their produce from their homes, fields and warehouse. Now, traders will visit the farmers. Earlier farmers were visiting to traders and used to take whatever money was paid by traders,” he said.
Tomar further elaborated that with the traders visiting farmers it will save farmers money, which they used to be spend on logistics. He said earlier farmers were bound to sell their crops at the rate fixed by Agriculture Produce Market Committee (APMC) and now they will be able to sell their produce anywhere.
“Farmers do farming and take their produce to mandis. There are 25-30 people with licences in these mandis. They do auction of produce of farmers. Whatever price is decided in auction, farmers were bound to sell their produce at that price whether they are happy or not because if they take their produce and go home and come back again they will have to pay additional logistics cost. The new Act allows farmers to sell their produce to anyone anywhere according to their will. There is tax in APMC. Under our Act, trade outside APMC, there will be no tax of either the state government or central government,” he said.
“APMC is the law of states. State governments run APMC and they are not bound by our law. Our law says there will be no tax in trade area outside APMC. Farmers will get benefit because if trade is taking place outside mandis, no tax will apply. Now, farmers have freedom to choose their way,” he added.
The two Bills — Farmer’s Produce Trade and Commerce (Promotion and Facilitation) Bill, 2020 and the Farmers (Empowerment and Protection) Agreement of Price Assurance and Farm Services Bill, 2020 — will free farmers from chains of APMC, Tomar said.
“Small farmers can now get guarantee of their produce during sowing of crop. They can now go towards expensive crops, use new technology, new seeds, good pesticides and reduce the input cost. These Bills are crucial and will bring revolutionary changes in the lives of farmers. I want to say to farmers that when these Bills will be implemented there will be change in their lives,” he added. (ANI)

Fire breaks out at Aditya Mall in Delhi’s Karkardooma

Illinois will lose one congressional seat as a result of…