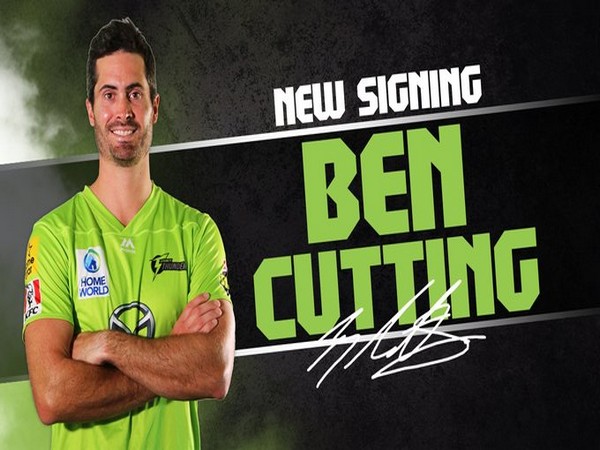 Sydney [Australia], September 24 (ANI): Sydney Thunder have confirmed the signing of Australian all-rounder Ben Cutting ahead of the upcoming Big Bash League (BBL).
Thunder have traded in Cutting from the Brisbane Heat. His performances for Brisbane made him a crowd favourite as he became the Heat’s highest wicket-taker with 63 scalps and its second-highest run-scorer with 1,199 runs at a strike-rate of 145.50.
The former international, who represented Australia in both formats of limited-overs cricket, said while there were compelling reasons for him to join the Thunder, there was one he couldn’t ignore.
“The people. A great cricket team is always made even better by the people that are part of it. I’ve always found in my experience that playing with good people breeds good culture and that breeds success… that’s one of the things that really attracted me to the Sydney Thunder,” Cutting said in an official statement.
Cutting added that he didn’t expect it would take him long to adapt to Thunder’s culture or its playing roster because of some old friendships.
“I know most of the Thunder guys really well. Obviously Brendan Doggett is a Queenslander; I’ve played a lot of cricket with and against Callum Ferguson over the last 10-15 year; I know Usman Khawaja really well – he’s going to be my best man for my wedding – and I know Chris Green from spending time with at tournaments across the world,” Cutting said.
“Shane Bond was a very big factor in my move. I had ‘Bondy’ as a bowling coach at the Heat, alongside Dan Vettori, for quite a few years. He was also my bowling coach in the IPL at the Mumbai Indians. So, I know him really well and he knows me – and my game – really well. He knows how to get the best out of me. He’s very diligent, which is what I like… very professional and very diligent… but he’s someone who has a lot of fun in coaching as well which is what the Big Bash is all about,” he added.
Sydney Thunder is set to open its tenth BBL campaign on 5 December against the Melbourne Stars at the MCG, before playing its second game at Sydney Showground Stadium on 8 December 2020 against Perth Scorchers. (ANI)

Two Turkish soldiers killed in IS attack in northern Syria

India focus on spin ahead of Pakistan clash