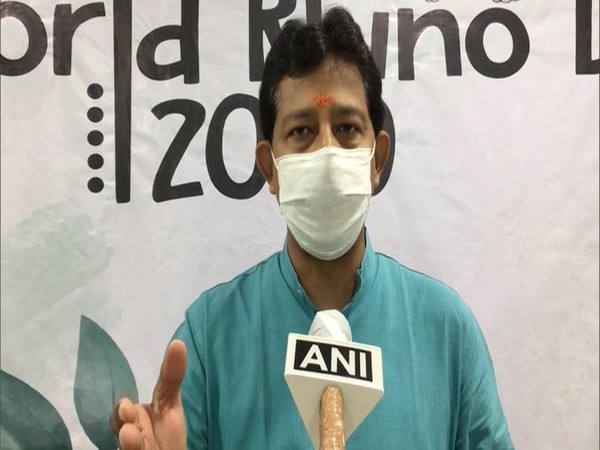 Siliguri (West Bengal) [India], September 23 (ANI): In a bid to prevent elephant deaths, the State Forest Department here will soon introduce rubber strips on the national highways, state highways and the Asian highway roads in the north Bengal region.
The West Bengal Forest Department has taken this initiative after conducting a meeting chaired by the State Forest Minister Rajib Banerjee. Representatives from railways, electricity board, highway, tea gardens attended the meeting.
Speaking to ANI, Forest Minister Rajib Banerjee said, “There are so many national highways running through elephant corridors. As a result, many incidents are happening on the highway only because of speeding vehicles.”
“So, we requested the NH authority to allow the Forest Department to set up some rubber strips on the roads. So they accepted our proposal and our department has started identifying a few roads and within a few weeks, it will be done. At present, it will be done on two state highways and on two national highways including the Asian Highway,” he added.
“We will not tolerate any illegal activities. Like railways, we have told them to control their train speed while passing through forest areas. Tea garden authorities were told to remove blade fencing,” Banerjee said.
He further stated that the authorities assured them to take care of all the instructions and follow them to avoid any unwanted incidents with elephants.
According to the last census conducted by the Ministry of Environment forest and climate change with the State Forest Department in the year 2017, there were around 500 elephants in the north Bengal forests. (ANI)

Responsibility of departments related to road construction to make pothole-free roads before festivals: UP CM