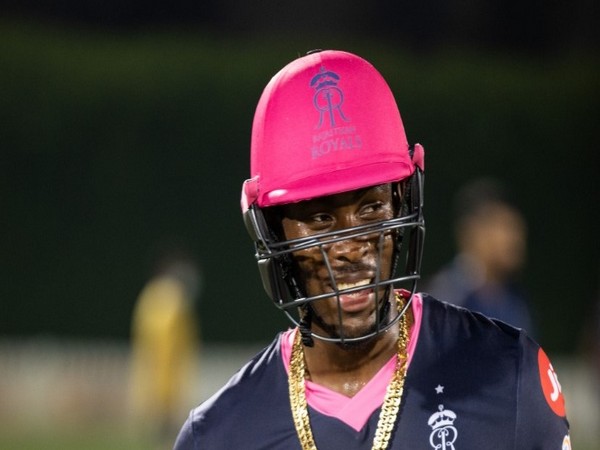 Sharjah [UAE], September 23 (ANI): Rajasthan Royals skipper Steve Smith hailed ‘terrific player’ Jofra Archer after the latter’s all-round performance helped the team trounce Chennai Super Kings (CSK) in the Indian Premier League (IPL).
“Jofra at the end was magnificent, getting us up to that total and then the boys did a good job with the ball… He came in and played an incredible inning tonight. He is a terrific player for us and did well with the ball as well,” Smith said in the post-match press conference.
Rajasthan Royals defeated CSK by 16 runs here on Tuesday. It was a highly competitive match as both teams touched the 200-run mark but Rajasthan Royals managed to outshine MS Dhoni-led CSK.
Archer played an unbeaten knock of 27 runs off just eight deliveries, helping his side to post a massive target of 217 runs for CSK. He conceded 26 runs from his four overs and took one wicket.
Smith also contributed a lot as he scored 69 runs in the match. During the match, Smith opened the innings for Rajasthan Royals, along with Yashasvi Jaiswal.
The skipper stressed that the return of Jos Buttler in the squad will not be a problem instead it will give the team options. Buttler missed the match as he was not part of the bubble that was created for the players travelling from the UK to the UAE and had to do a full six-day quarantine.
“No, I do not think so, it gives us options. Jos coming back in the next match is a big plus for us,” Smith said. (ANI)

‘Children Of War’ – masterpiece on ravages…

Afghanistan declares day of mourning as army base toll rises