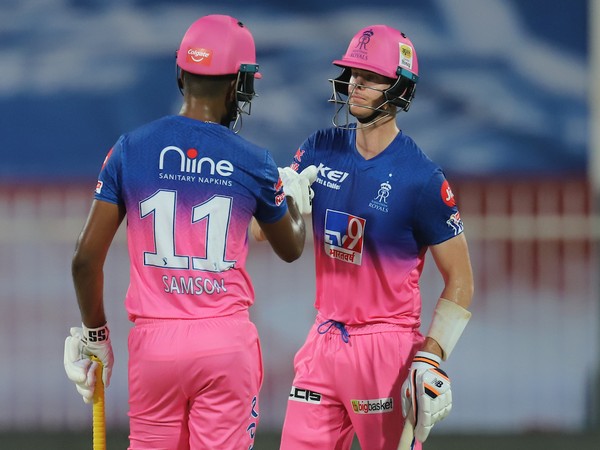 Sharjah [UAE], September 22 (ANI): Rajasthan Royals defeated Chennai Super Kings (CSK) by 16 runs in the Indian Premier League (IPL) here on Tuesday.
It was a highly competitive match as both teams touched the 200-run mark but Rajasthan Royals managed to outshine MS Dhoni-led CSK.
Chasing a huge target of 217 runs, Chennai Super Kings got off to a flying start as Shane Watson and Murali Vijay struck regular boundaries. Watson smashed Tom Curran two sixes and a four in the sixth over, taking CSK past the 50-run mark.
However, in the next over, Rahul Tewatia got hold of Watson, who played a knock of 33 runs off 21 balls. Shreyas Gopal then dismissed Vijay (21) in the eight over.
Faf du Plessis and Sam Curran then took the field but their partnership did not last long. Sam Curran smashed two consecutive sixes to Tewatia but the bowler made a brilliant comeback in the same over as he picked two wickets. Tewatia removed Sam Curran (17) before taking the wicket of Ruturaj Gaikwad (0).
The fall of wicket did not stop as Kedar Jhadav too was sent back to the pavilion in the 14th over. After the completion of the 14th over, CSK were playing at 155/5.
Skipper MS Dhoni then joined Du Plessis out on the field. Du Plessis played with an attacking mindset and hit Rajasthan Royals’ bowlers for sixes and boundaries. He struck three sixes to Jaydev Unadkat in the 17th over, taking CSK over the 150-run mark.
With this, Du Plessis also completed his half-century off 29 balls. Despite Du Plessis’ fast-paced innings, Rajasthan Royals continued to be on the dominating side as CSK had a huge target to chase. The match came to a point when CSK needed 48 runs from 12 deliveries, with Du Plessis and Dhoni on the field.
Jofra Archer bowled the second last over and although he was hit for a six, he managed to clinch the much-needed wicket of Du Plessis, who scored 72 runs off 37 balls. CSK needed 38 runs from the last over and Dhoni smashed three consecutive sixes to Tom Curran but they were not enough for the win as Rajasthan Royals secured the victory.
Earlier, put in to bat, Rajasthan Royals had a worst possible start with opener Yashasvi Jaiswal walking back to the pavilion in the third over.
Sanju Samson then joined skipper Steven Smith and bludgeoned the Chennai Super Kings’ bowling attack. Samson whacked nine sixes in his blistering innings of 72 runs in just 32 balls.
The duo formed mammoth 121 runs stand for the second wicket before Lungi Ngidi ended Samson’s innings in the 12th over. David Miller had a disappointing end as he got run out without even having a stroke.
To continue the momentum, Robin Uthappa tried to go for the big shot towards long-off, but Du Plessis took an amazing catch, reducing Royals to 160/4. Meanwhile, Smith continued his stellar batting and scored boundaries at regular intervals.
Sam Curran scalped two wickets in his third over and then dismissed Smith in his fourth over to put a brake on Royals’ momentum in the game. However, a late onslaught by Jofra Archer helped Rajasthan Royals get pass the 200 run mark. Archer smashed four sixes in the final over of CSK as Lungi Ngidi went for 30 runs in the 20th over.
For CSK, Curran took three while Chahar, Ngidi, and Piyush Chawla scalped one wicket each. (ANI)